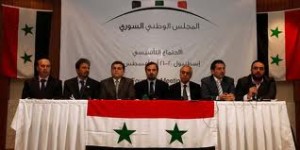 The Arab League must bring the U.N. into the effort to stop Syria’s bloody crackdown on protesters, the top opposition leader said Sunday, as security forces pressed ahead with raids and arrests around the country.

Burhan Ghalioun, the Paris-based leader of the Syrian National Council, made the plea as Arab League officials were setting up observer teams, part of their plan to end nine months of turmoil that has killed more than 5,000 people, according to the U.N.

Opposition groups believe the Arab League is not strong enough to resolve the crisis, which is escalating beyond mass demonstrations into armed clashes — and a double suicide bombing that shook Damascus on Friday.

In a televised speech marking Christmas, Ghalioun said, “I call upon the Arab League to ask the Security Council to adopt its plan in order to increase possibilities of its success and avoid giving the regime an opportunity not to carry out its obligations.”

He said the opposition council “holds the international community to its responsibilities and asks them to use all available means to put an end to the tragedies experienced by the Syrian people.”

The Arab League has begun sending observers into Syria to monitor compliance with its plan to end to the crackdown on political opponents. The 22-member bloc has warned that it could turn to the U.N. Security Council to help stop the violence that began nine months ago.

The Arab League plan requires the government to remove its security forces and heavy weapons from city streets, start talks with opposition leaders and allow human rights workers and journalists into the country. Syria agreed to the plan but has stalled implementation.

On Saturday, the British-based Syrian Observatory for Human Rights and the Local Coordination Committees activist groups said troops shelled the town of Juraithi in the eastern province of Deir el-Zour. An unknown number of people were wounded and dozens detained. They also reported that parts of the restive central city of Homs was bombed Saturday, killing at least three people.

The two groups also blamed the regime for the assassination of former member of Assad’s ruling Baath party in Homs Ghazi Zoaib and his wife later Saturday. The groups said Zoaib had recently expressed support of the opposition.

The Syrian government has long contended that the turmoil in Syria this year is not an uprising by reform-seekers but the work of terrorists and foreign-backed armed gangs.

Syria blamed al-Qaida for sending two suicide car bombs that blew up in Damascus Friday, killing 44 and wounding dozens more. Opponents of President Bashar Assad suggested the regime itself might have been responsible.