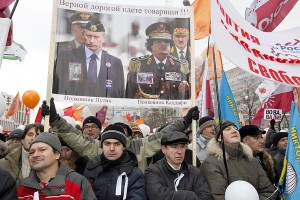 Tens of thousands of people fed up with Vladimir Putin’s domination of Russian politics and his perceived arrogance jammed one of Moscow’s broadest avenues for a giant protest, vowing to keep building the pressure until the longtime leader is driven from power.

The demonstration, the largest in Russia’s capital since the breakup of the Soviet Union in the early 1990s, was a direct rebuff of Putin and President Dmitry Medvedev, both of whom in recent days had sought to mollify critics by promising political reforms.

Many in the Moscow crowd said they were tired of the autocratic attitude of Putin, who served as president for eight years beginning in 2000 and is seeking a return to the presidency in an election scheduled for March. Speakers at a central platform, their remarks booming out from huge screens placed along the protest route, ratcheted up their rhetoric and declared their intent to build on their momentum.

“In 2012, we will clear the Kremlin of swindlers and thieves,” vowed opposition leader Garry Kasparov, a former world chess champion.

The rally was held along Sakharov Avenue, named for dissident nuclear scientist Andrei Sakharov. Thousands of people also protested in cities and towns across Russia.

“This movement shows us that the country has changed,” said Vladimir Lukin, a presidential envoy on human rights, who came to the Moscow rally as an observer. “The authorities at last realized how many people want changes.”

Those in attendance included young and old, who sacrificed Christmas shopping, family brunches, skating and skiing excursions to join the latest vote fraud protest in what some have begun calling the “Russian Winter,” an allusion to the “Arab Spring” in North Africa and the Middle East.

Winds of change have been blowing through the country since the Dec. 4 polling, which was marred by allegations of foul play. Protests began a day later and were at first forcefully dispersed by police, who arrested several hundred activists.

On Dec. 10, a peaceful protest in Moscow drew a then-unprecedented crowd of about 60,000, most of them young adults and middle-class people who previously had shunned politics.

Since then, the results of the parliamentary vote have been annulled at 21 polling stations and investigations continue. The Presidential Council on Human Rights demanded Friday the resignation of the chairman of the central election commission, a staunch Putin ally.

On Saturday, riot police stayed on side streets and did not display weapons or shields.

As the crowd formed along the mile-long protest route, one police officer said to a colleague: “If they decide to march on, can we contain them, do you think?” The other shook his head in disbelief and said: “We won’t last a quarter of an hour with this crowd. We will need an army to hold them.”

Activists appeared especially disturbed by recent remarks from Putin in which he compared the white ribbons worn by street protesters to condoms, and a literary allusion in which he portrayed himself as a wise and powerful python from Rudyard Kipling’s “The Jungle Book” and protesters as disorganized and cowardly monkeys.

Key Kremlin official Vladislav Surkov has sought to repair the damage by saying that protesters represent “the better part of our society.”

“They can’t be condescendingly brushed away,” he said Thursday in an interview with the pro-Kremlin daily Izvestia, acknowledging that “the tectonic structures of the society have started to move.”

Nonetheless, the Saturday protest took on a new level of vitriol, with protesters wearing white ribbons, badges, balloons and more. One man carried an image of Putin with a huge condom wrapped around his neck. Others carried posters of him next to Moammar Kadafi and Kim Jong Il.

Several speakers, appearing emboldened by the crowd size, which protest leaders estimated at 120,000 (the Moscow police estimate, in contrast, was 29,000), threatened to grab power if their demands were not met.

“We have enough people here to take the Kremlin … right away!” shouted blogger Alexei Navalny, who was released from jail Tuesday after a 15-day stay for his actions at previous protests.

“We won’t do it now though, but if the swindlers and thieves continue robbing us and lying to us we will ourselves get back what belongs to us,” said Navalny, who has become well known for taking on state-owned business giants Gazprom and Rosneft over alleged corruption.

“We don’t want to scare anyone, but we believe that next year there will be a peaceful change of power and power will belong to … the people,” he said to the loudest applause of the day.

Navalny promised 1 million protesters at future rallies, which he said would continue until the Kremlin gives in to the demands of the movement, including the immediate release of all political prisoners and the voiding of the tainted election results. Opposition leaders also called for new elections and said Putin should not receive a single vote in the March voting.

Participant Vladimir Mikhailov, 47, a medical equipment company director from northern Russia, said he was overwhelmed by the size of the rally in Moscow.

“I am so happy to see so many people here who are not afraid to come and protest against lawlessness and corruption,” said Mikhailov, who dropped his United Russia membership just before the parliament vote.

“Being here makes me 20 years younger as we witness such tremendous change in social and political awareness compared with what we saw over the last two decades,” said Russian democratic movement veteran Viktor Sheinis. “It will really be a cold shower and a huge loss for the country if this movement doesn’t achieve anything soon and its tremendous drive and enthusiasm is eventually wasted.”

“That,” said Sheinis, coauthor of the 1993 Russian Constitution, “is what the authorities are counting on.”

Photo: “You are on the right road, comrades!!! Colonel Putin and Colonel Kadafi.” reads a simulated poster held by participants in a multi-thousand protest rally in downtown Moscow Saturday, DECEMBER 24, 2011