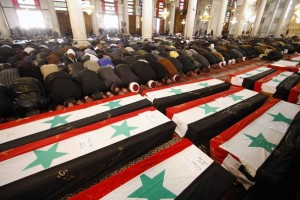 Syria’s Muslim Brotherhood on Saturday denied an Internet claim of responsibility that it was behind suicide bombings in Damascus, saying the claim was posted on a fake website created by the regime.

Spokesman Zuhair Salem, speaking from London, said the claim was “completely fabricated under our name on the Internet,” pinning responsibility on the regime of President Bashar al-Assad.

It was “completely orchestrated by the regime, just as the attacks were,” he added.

The remarks came in reaction to news that a website purporting to be that of the Muslim Brotherhood in Syria claimed that four suicide bombers had carried out Friday’s attacks in which 44 people died and 166 were wounded.

The site, which was blocked shortly after the claim made headlines, had warned Syrians there would be further attacks against government offices and security services in the coming 10 days.

Syria’s Muslim Brotherhood accuses the regime itself of staging the bombings which coincided with the first day of work of an Arab League team in Damascus to monitor events and pave the way for a larger group of observers.

“The regime gave a bloody welcome to the team of Arab observers, in the morning of Holy Friday, to cover up the weekly demonstrations across the Syrian map,” the group said in an official statement released after the attacks.

Friday prayers have become a lightning rod for anti-regime demonstrations in Syria, each week ending in bloodshed.

The Muslim Brotherhood also cast doubt on claims by the Syrian regime that Al-Qaeda was behind the twin blasts in Damascus.

“The attack was blamed on Al-Qaeda at the same time as the explosions were announced, before any investigation was made,” it read.

“They (the Syrian authorities) are saying to the West: beware, for we have a common enemy,” it added.

The statement also took to task Syria’s announcement that it been warned by its allies in Lebanon that Al-Qaeda had infiltrated Syria two days before the attacks.

“This means the crime was planned beforehand,” it said.

The purpose of this cover-up was to conceal “the real picture of the martyrs of Jabel al-Zawiyah and Kafer Awid.”

On Thursday, the Syrian Observatory for Human Rights released a grisly video to back its claim security forces committed a massacre in the northwestern town of Kafer Awid in the Jebel al-Zawiyah mountains, Idlib province, on Tuesday.

Syria’s main opposition group on Wednesday had urged the UN Security Council and Arab League to hold emergency meetings into “the bloody massacres” as it reported 250 people killed in the previous 48 hours.