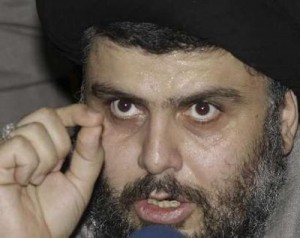 Iraq’s anti-American Shiite cleric launched Saturday an initiative calling for peaceful coexistence among all Iraqis after the withdrawal of U.S. troops from the country.

Muqtada al-Sadr, whose militiamen were blamed for sectarian killings during the worst years of Iraq’s violence, is seeking to assert his political weight in post-U.S. troops Iraq.

The initiative comes as a government crisis has strained ties between two main Muslim sects, Sunnis and Shiites to the breaking point.

The Shiite Prime Minister, Nouri al-Maliki is engaged in a showdown with the top Sunni political leader in the country. His government has issued an arrest warrant for Sunni Vice President Tariq al-Hashemi for what al-Hashemi says are trumped-up charges that he ran hit squads against government officials.

Al-Sadr’s proposal comes just two days after a terrifying wave of Baghdad bombings killed 69 people and wounded nearly 200. The bombs tore through mostly Shiite neighborhoods of the Iraqi capital, evoking fears the country could dissolve into a new round of sectarian violence.

Al-Sadr’s associates handed out to the media a 14-point “peace code” proposal written by the radical cleric. It warns against spilling Iraqi blood and urges respect for all religions, sects and ethnic groups.

Al-Sadr’s aide Salah al-Obeidi described the code as an attempt “to preserve the unity of the country and save it from fighting.”

“It is the best solution, to reject all kinds of violence and to preserve the Iraqi people from internal and external attacks,” al-Obeidi said.

According to Dhia al-Assadi, another prominent Sadrist politician, 500 people, including politicians, lawmakers, academics, scholars and tribal sheiks have signed on to this code.

“This charter is like a life jacket in this very tough phase we are passing through,” al-Assadi said.

Former Prime Minister Ibrahim al-Jaafari, who also attended the Sadrist conference in Baghdad on Saturday, hailed the initiative, saying “came at the right time” for Iraq.

It remained too early to say how much traction al-Sadr’s proposal could gain among Iraqis or the country’ top leadership. The final text of the code, entitled “Iraqi National Code of Honor,” remains to be worked out. The Sadrists hope to put it to a countrywide referendum.