by yalibnan
1010
The rise of the Islamists, in the form of the Muslim Brotherhood's Freedom and Justice Party (FJP) followed by the ultra-conservative Al Nour coalition, has shocked the secular-liberal political formations.
Share: 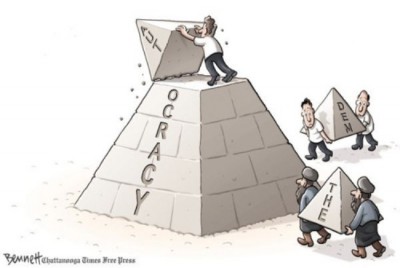 Voting in droves in the first parliamentary elections held after the fall of dictator Hosni Mubarak, the Egyptian electorate seems to have overwhelmingly balloted for the well established Islamist parties.

The rise of the Islamists, in the form of the Muslim Brotherhood’s Freedom and Justice Party (FJP) which has, in the course of Egypt’s three-stage elections, secured the maximum number of seats, followed by the ultra-conservative Al Nour coalition, has shocked the secular-liberal political formations. For some, the rout of Egypt’s young revolutionaries — mostly liberal — who were at the heart of the blazing uprising that ended Mr. Mubarak’s rule was disappointing and puzzling. Their defeat, despite their stunning success at the Tahrir Square, icon of the Egyptian revolt, has raised some salient questions. Did the young revolutionaries who sacrificed so much to bring down Mr. Mubarak end up, unwittingly, as agents of political Islam? Like the leftist Tudeh party of Iran, which in the end was forced to surrender the revolution to Ayatollah Khomeini’s Islamist legions, will history judge the Tahrir Square pioneers as diggers of a foundation that established Egyptian theocracy?

The jury is still out on the direction, along a forked road, Egypt’s long revolution will inevitably take. But as long as the country remains in a deep political flux and is not ossified along religious lines, there is plenty of hope for Egypt’s youthful liberals to succeed.

While immediate electoral gains have eluded them, the pioneers of the revolution have already accomplished a lot. The 18-day revolt that began in January not only toppled Mr. Mubarak but also opened the door for the establishment of democracy and elections in the country. As long as the channels of peaceful change through the ballot remain open, the current situation, through skilful organisation and effective mobilisation, can always be reversed.

The vanguard of the women’s movement has already grasped the political essence of the post-Mubarak situation, and is unfazed by the Islamist assertion in the polls. Fully aware that democracy has opened up public space to an unprecedented level, seasoned women activists are feverishly engaged in re-working a strategy to fulfil, however incrementally, their aspirations for gender equality. Some feminists assert that in order to achieve success, the women’s movement should not remain isolated; it should fuse with the larger political movement for change. To illustrate her point, Hala Kamal, Executive Director of the Women and Memory Forum, told the Egyptian website Al Ahram Online that women activists played a critical role in two other turning points in the country’s modern history — the 1919 and 1952 movements, both rooted in the nationalist discourse.

With the fledgling democracy expanding the space for political assertion, Egypt’s liberals now have a chance to enhance their profile in the public domain. A focussed effort to bond with like-minded groups such as women’s organisations has now emerged as a distinct possibility. Similarly, young leftists, who played a prominent part in the Tahrir campaign and have mobilised, among others, oil and railway workers, may get the natural advantage of drawing trade unions into the secular-democratic fold. Already, Egypt’s new-age leftists, flexible and non-doctrinaire in their approach, are breaking new ground in mobilising blue-collar workers. The Egyptian Federation of Independent Trade Unions (EFITU) is fast emerging as a powerful force in demanding humane working conditions. It is calling for ratification of a new law on trade union freedoms, as well as a law that would raise the minimum wage and pension and establish a maximum wage ceiling. The EFITU is affiliated to the London-based Middle East and North Africa (MENA) Solidarity Network, as part of its strategy to draw trade unionism in Egypt into the global mainstream.

The Left-Liberal fold can expand further, if Egypt’s already established syndicates, which cover professionals such as lawyers, doctors and journalists, are also mobilised along political lines. Doctors donning white coats and lawyers in their black robes visibly demonstrated their high level of politicisation when they famously visited the Tahrir Square during the uprising, to express their rejection of Mr. Mubarak’s authoritarian rule.

But before non-religious forces establish a critical mass and make a serious bid for office, they may have to shed some of their ideological blinkers which, as prisoners of the Tahrir’s success, they continue to wear. While there was a core group of organisers such as Ahmed Maher’s April 6 Youth movement, which drew inspiration from Serbia’s Otpor movement, a large number of Tahrir occupants revolted spontaneously. Fed on high-octane euphoria, resulting from Mr. Mubarak’s fall, many felt that “spontaneity” would be enough to see them through the elections that followed. The lack of a strong organisation, an absolute necessity to win elections, has been a major cause of their undoing. Numbed by their defeat, Egypt’s liberals, especially youth, are now beginning to understand their folly. Says Rawiyeh ElGemal, a young bank executive and election volunteer from Cairo’s upscale Zamalek neighbourhood: “The Muslim Brotherhood is so well organised. They completely outmatched us in their reach. Unfortunately, we have to learn the importance of organisation the hard way.” The youth have to throw up their own leaders who “emerge through a democratic process from within,” she adds.

Speaking on similar lines during an interview with the Associated Press, elder statesman Mohamed ElBaradei observed that Egypt’s young revolutionaries had been “decimated” because they lacked coherence. The former head of the International Atomic Energy Agency said the youth had failed to unify and form “one essential critical mass.”

As they absorb the shock of defeat, the young Egyptians, unschooled so far in electoral politics, may soon have to recognise that the formula for success could lie in the right combination of tactical ingenuity and lofty idealism. With the military still unwilling to relax its grip on power and continuing to remain the chief obstacle to a democratic transition, it may become necessary for the liberals to work with the Islamists on a carefully defined common platform.

Many among the new generation Islamists advocate the adaptation of the so-called “Turkish model” for Egypt. They point out that Egypt is not the first country to be swept by the moderate Islamist tide. The soft-Islamist wave began with Turkey in 2002, when the AK Party won the elections. In the aftermath of the Arab Spring, the region’s pro-democracy revolt, Islamists, mostly with a moderate persuasion, have triumphed in Tunisia and Morocco.

Amplifying its inclination to steer the middle course, the Brotherhood has declared that despite its strong showing in the polls, it favours the formation of a national unity government, including the liberal parties. The FJP, the Muslim Brotherhood’s political arm, also issued a statement denying that it had struck an alliance with the Al Nour coalition, comprising mainly Salafi activists. The Salafis wish to work for the remaking of society based on principles traced to pristine Islam. Some analysts are of the view that there are pressing international compulsions that would dissuade the Muslim Brothers from allying with the Salafis, whose proclivity for violence and puritanical extremism is well known. Egypt’s liberals have their task cut out. Apart from organising themselves well, they may have to work diligently, with allies and others, including the moderate Islamists, to complete Egypt’s difficult transition to democracy.