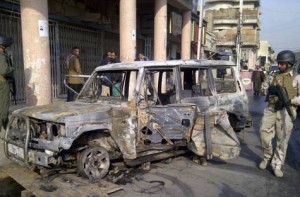 Twin suicide car bombs blasted outside two buildings of Syria’s powerful intelligence agencies Friday, killing at least 44 people and wounding more than 166, authorities said, in the first such attacks since the country was thrown into turmoil by the 9-month-old uprising against the rule of President Bashar Assad.

The government quickly held up the explosions as proof of its claims that it is battling not a popular uprising but terrorists intent on overthrowing the regime. But its opponents cast doubt on its account, hinting that the regime itself could be behind the attack to make its case to Arab observers who arrived in the country only a day earlier.

CBS News’ George Baghdadi reports that opposition members have remained skeptical – even since the deal with the Arab League was signed – that the Assad regime will allow the observers to operate with anything resembling independence.

The morning explosions left a swath of destruction, with torn bodies on the ground outside the headquarters of the General Intelligence Agency and a nearby branch of military intelligence, two agencies that have played a significant role in the bloody campaign against anti-Assad protests since March. All the windows in the military building were blown out and dozens of burned out cars lined the street.

State TV said initial investigations indicated possible involvement by the al Qaeda terror network. Government officials brought the advance team of Arab League observers to the scene to see the wreckage. The team arrived on Thursday, the start of a mission to monitor Syria’s promises to end its crackdown.

“We said it from the beginning, this is terrorism. They are killing the army and civilians,” Deputy Foreign Minister Faysal Mekdad told reporters outside the intelligence headquarters.

Alongside him, the advance team’s head, Sameer Seif el-Yazal, said, “We are here to see the facts on the ground. … What we are seeing today is regrettable, the important thing is for things to calm down.”

Assad’s regime has long contended that the violence in the country is being fueled by terrorists and foreign-backed armed gangs. In recent months, dissident soldiers have broken from the military to side with peaceful protesters and have carried out attacks on government forces. But Friday’s attack was qualitatively different from any past attacks — the first suicide bombings seen during the conflict — and whoever was behind them, they add new and ominous dimensions to a conflict that has already taken the country to the brink of civil war.

An opposition leader raised doubts over the authorities’ version of events, suggesting the regime was trying to make its case to the observers.

Omar Idilbi, a member of the Syrian National Council, an anti-regime umbrella group, called the explosions “very mysterious because they happened in heavily guarded areas that are difficult to be penetrated by a car.”

He stopped short of accusing the regime in the bombings, but he said authorities wanted “to give this story” to scare observers from moving around the country and send a message that “Syria is being subjected to acts of terrorism by members of al Qaeda.”

In Washington, U.S. State Department spokemsan Mark Toner said in a statement that the U.S. condemns the bombings “in the strongest terms.” He said it was “crucial” that the attack not impede the work of the Arab observers and that the regime must “cooperate fully and quickly” with it.

Friday’s two blasts went off within moments of each other at 10:18 a.m., echoing across the city. The Interior Ministry said the vehicles detonated at the gates of the two walled compounds.

Outside the two buildings, mutilated and torn bodies lay amid rubble, twisted debris and burned cars in Damascus’ upscale Kfar Sousa district. Bystanders and ambulance workers used blankets and stretchers to carry bloodstained bodies into vehicles. All the windows were shattered in the nearby state security building, which was targeted by the other bomb.

“The explosions shook the house; it was frightful,” said Nidal Hamidi, a 34-year-old Syrian journalist who lives in Kfar Sousa. He said gunfire was heard immediately after the explosion and said apartment windows in a 200-yard (meter) radius from the explosions were shattered.

The ministry said in a statement that at least 44 people were killed and 166 wounded. Earlier, state TV said most of the dead were civilians but included military and security personnel.

Security officials showed journalists at the scene two mangled vehicles they said were used in the attack.

Maj. Gen. Rustom Ghazaleh, head of military intelligence, said the attacks were proof of a foreign plot against Syria. “We will fight this project until the last drop of blood,” he declared.

A Syrian military official said the bomb targeting the military intelligence building, the bigger of the two blasts, weighed more than 660 pounds (300 kilograms) and gouged a crater into the ground that was 2 yards deep and 1.5 yards wide. It killed 15 people, among them a retired brigadier general.

In the years before the uprising, Syria had occasional clashes with al Qaeda-linked militants, and the Sunni terror network has denounced the regime, which is largely secular and led by Assad’s minority Alawites, a Shiite offshoot. Bombings in the country are rare, though in September 2008 a suicide car bomb struck outside a security building on Damascus’ southern outskirts, killing 17 people, the deadliest attack in decades.

The blasts came as the Syrian government escalated its crackdown ahead of the arrival Thursday of the Arab League observers. More than 200 people were killed in two days this week, particularly in a bloody attack Tuesday, when activists and witnesses say troops pounded more than 100 fleeing villagers trapped in a valley with shells and gunfire, killing all of them.

Syria’s violent crackdown on opposition protesters during the past year has, however, prompted the formation of a rebel militia, known as the Free Syria Army, members of which met CBS News correspondent Clarissa Ward when she sneaked into the closed nation posing as tourist several weeks ago. (Click video player at left for a full report)

The observer team is supposed to verify Syria’s implementation of promises to pull back its troops and halt the crackdown. But the regime has said the team will vindicate its claims that terrorists are behind the country’s turmoil, with Foreign Minister Walid al-Moallem saying it’s in Syria’s interest for the observers to see what is really happening in the country.