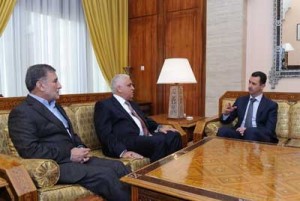 An Iraqi team held “positive” talks with Syrian President Bashar al-Assad on Saturday in a bid to end the deadlock over an Arab League plan to stop nine months of bloodshed, its leader told AFP.

“I am on my way to Cairo for a meeting with the Arab League after holding positive talks with President Assad,” National Security Adviser Falah al-Fayadh ( see photo ) said.

“We explained the Iraqi position,” he added, which is designed to bring a peaceful end to the ongoing clashes in a way that respects “the will of the Syrian people, in the framework of democratic change.”

Iraq’s Prime Minister Nuri al-Maliki told AFP on Thursday that Baghdad wants to open a dialogue between the opposition and the Damascus regime to reach a result that satisfies both sides.

“America and Europe are afraid of the phase after Bashar al-Assad. That is why they understand the initiative” from Iraq, Maliki said.

The United Nations this week estimated that more than 5,000 people have been killed in the Syrian government’s crackdown on dissent, now in its 10th month.

Shiite-led Iraq has so far shied away from punitive measures against Assad’s Alawite Shiite regime, abstaining from both a vote to suspend Syria from the Arab League and another to impose sanctions on Damascus.

There are fears among officials in Iraq, which has a substantial Sunni minority, that instability in neighbouring Sunni-majority Syria could spill over the border.

The speaker of Iraq’s parliament, Osama al-Nujaifi, said on Wednesday that he feared sectarian strife in Syria would impact Iraq, adding that that the Arab League has the right to send observers into Syria to assess the conflict.