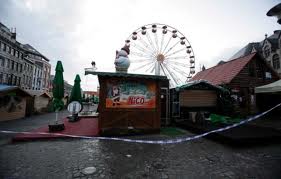 A man armed with grenades and an assault rifle attacked holiday shoppers Tuesday at a central square in the Belgian city of Liege, leaving four people dead and wounding 75 others, officials said.

It was not immediately clear what motivated the attack in the busy Place Saint-Lambert, the central entry point to downtown shopping streets in the industrial city in eastern Belgium. The attack ignited a stampede of hundreds, as shoppers fled the explosions and bullets.

Interior Ministry official Peter Mertens said the attack did not involve terrorism but did not explain why he thought that.

Belgian officials identified the attacker as Norodine Amrani, 33, a Liege resident who they said had done jail time for offenses involving guns, drugs and sexual abuse. He was among the dead, but Liege Prosecutor Danielle Reynders told reporters it was unclear if he committed suicide or died by accident. He did not die at the hands of police, she said.

The dead also included two teenage boys, 15 and 17, and a 75-year-old woman, she said. The La Libre newspaper reported that a 2-year-old girl was clinging to life.

Reynders said Amrani had been summoned for police questioning on Tuesday but the reason for the questioning was not clear. He still had a number of grenades with him when he died, she said.

Officials said Amrani left his home in Liege with a backpack, armed with hand grenades, a revolve and an FAL assault rifle. He walked alone to the central square, then got onto a platform that gave him an ideal view of the square below, which was bedecked with a huge Christmas tree and crowded with shoppers.

From there, Amrani lobbed three hand grenades toward a nearby bus shelter, which serves 1,800 buses a day, then opened fire on the crowd. The explosions sent glass from the bus shelter across a wide area.

“I heard a loud boom,” said witness Dimitri Degryse. “I thought it was something on my car that was broken or something. Then a few seconds after a second boom, and I saw all the glass breaking, I saw people running, screaming.”

As soon as the shooting began, hundreds of people fled the square as well as a Christmas market in an adjacent square, rampaging through old city streets looking for cover. Video from the scene showed people, including a large group of children, fleeing the city center, some still carrying shopping bags.

As police hunted for possible accomplices, residents were ordered to stay in their homes or seek shelter in shops or public buildings. As sirens howled and a police chopper roared overhead, a medical post was set up in the nearby courtyard of the Prince Bishops courthouse. Dozens of emergency vehicles took victims away for treatment.

Police closed off the area but found no accomplices and calm returned a few hours after.

The Place Saint-Lambert and the nearby Place du Marche host Liege’s annual Christmas market, which consists of 200 tiny shops and attracts some 1.5 million visitors a year. By dusk, with the Christmas lights gleaming again, King Albert II and Queen Paola came to pay their respects, as did Prime Minister Elio Di Rupo.