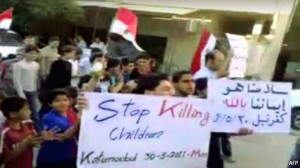 The world’s largest Islamic body urged Syria on Wednesday to “immediately stop the use of excessive force” against its citizens to avert the threat of foreign intervention.

Ekmeleddin Ihsanoglu, secretary-general of the Organization of Islamic Cooperation (OIC), told a news conference in the Red Sea City of Jeddah that foreign ministers attending an OIC meeting called on Damascus to quickly enter into a dialogue with its opponents and rejected foreign intervention in Syria.

“The executive committee (of the OIC) … urges the Syrian authorities to immediately stop using excessive force against citizens and to respect human rights,” a final statement said.

Syrian security forces have been using lethal force to crack down on demonstrations that began in March against 41 years of rule by Bashar al-Assad’s family. Assad says his forces are confronting saboteurs inspired by foreign powers.

Wednesday’s OIC meeting came after the Arab League suspended Syria and imposed sanctions over its violent crackdown on eight months of protests.

The League has demanded that Damascus allow a 500-strong monitoring mission into Syria.

A technical committee of the Arab League is scheduled to meet in the Qatari capital Doha on Saturday to discuss and announce what sanctions will be imposed on Damascus.

Syrian Foreign Minister Walid al-Moualem left after the end of the meeting on Wednesday without speaking to journalists.

NO TO OUTSIDE INTERVENTION

Ihsanoglu earlier said the 57-member body wanted to try to resolve the crisis in Syria within the OIC without foreign intervention, saying the group opposed any plans to take the issue to the international community.

“We are keen to preserve Syria’s safety, security and stability, and insist on rejecting the internationalization of the Syrian crisis and on working towards resolving it within the broader Islamic family as represented by the OIC,” Ihsanoglu said at the start of the meeting.

“We need to reiterate our stand against any internationalization of the Syrian crisis,” he told the meeting.

But at a news conference after the session, Ihsanoglu warned that Syria’s failure to heed calls for a peaceful resolution would make internationalization inevitable.

“If this problem is not solved within this family, it will go to other places … We think and Syria thinks that it is better to solve the problem within this framework,” he said.

Asked if the OIC had considered expelling Syria from its ranks, Ihsanoglu said that was not considered.

“Even in the Libyan crisis lately, the organization did not take such a decision because expulsion does not achieve any goals but cuts lines of communication,” he said.

Syria’s biggest trade partner Turkey suspended all financial credit dealings with it on Wednesday and froze its government’s assets, joining the Arab League in isolating President Bashar al-Assad over his military crackdown on opponents.

European and Arab diplomats say the top United Nations human rights forum will paint a grim picture of events in Syria at a special session on Friday which is likely to condemn the Syrian government for crimes against humanity.