Geagea: Hezbollah has to hand over to STL the 4 suspects 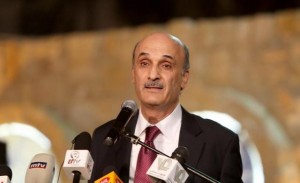 “Mikati’s stance came as his official position as the Lebanese premier, so whether we want it or not, Hezbollah and its allies recognized the STL since they are the majority in the cabinet,” Geagea said

Geagea also said that if Hezbollah has the “least amount of credibility,” then it should recognize the STL by handing over the four Hezbollah indicted members in the UN-backed court.

“The third step is to follow up on the tribunal’s procedures” on a legal basis, he added.

“We still call on this cabinet to resign because it funded the STL based on a Syrian political decision…That is why it should resign today before tomorrow.”

Geagea also said the Lebanese army, state and UNIFIL should be held responsible for Tuesday’s rocket launch from the South, adding that “illegitimate arms” should be confiscated.

He is referring to the rocket exchange with Israel following the firing of 2 rockets from south Lebanon Monday night towards Israel.

A security camera recorded Monday night the launching of two Grad rockets from Lebanon and also shows that they landed in Israel near Aita al Shhab and Rmaish . The cameras also show that Israel responded by firing 6 artillery shells that landed in the outskirts of Aita al Shaab , Debel and Haneen in south Lebanon according to a report by An Nahar