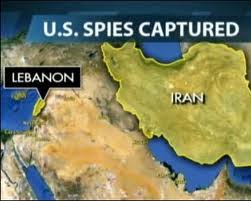 The report could not be independently confirmed.

Sorouri did not mention the nationalities of the people arrested or say when and where they were arrested, IRNA reported.

“It’s possible that Iran sees this as an opportunity to just jump on the bandwagon after Hezbollah-related stories earlier this week,” said a U.S. official who was not authorized to talk on the record. “They’ll do anything to try and get international pressure and attention off of them, but it won’t work.”

The news comes after the reported capture this week of several CIA informants in Lebanon by Hezbollah, a group closely aligned with Iran that the United States views as a terrorist organization.

A U.S. official confirmed this week that Hezbollah had captured of CIA informants in Lebanon, but the official did not say how many were detained.

“Collecting sensitive information on adversaries — who are aggressively trying to uncover spies in their midst — will always be fraught with risk. Good CI (counterintelligence) can mitigate risks, but won’t eliminate them all,” the source said.

In May, the Iranian intelligence minister, Heidar Moslehi, said that more than 30 U.S. and Israeli spies had been discovered, the semi-official Fars news agency reported Thursday.