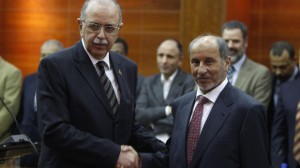 Libya’s transitional leaders swore on a Quran to uphold the ideals of the revolution that toppled Moammar Gadhafi as they took their oaths of office Thursday, another key step in the country’s hoped-for march toward democracy.

The lineup of relative unknowns, almost all of them older men, will confront daunting challenges, like establishing control over the fractured nation after the ousting of Gadhafi’s 42-year regime, along with building up state institutions practically from scratch.

Prime Minister Prime Minister Abdurrahim el-Keib took his vow before the transitional council’s leader, Mustafa Abdel-Jalil. He then placed his hand on an ornately decorated Quran and swore to “remain loyal to the goals” of the revolution.

El-Keib said he and his ministers were “upbeat” and optimistic about leading Libya toward elections, scheduled to take place by next June.

“We are looking forward to having an exciting seven months ahead of us, with lots of things to do and hopefully good results,” el-Keib told reporters after the ceremony.

One by one, the ministers took their oath before approaching Abdel-Jalil and shaking his hand. Some, moved by the symbolic moment, also embraced him as they stood before two national flags.

The transitional Cabinet includes 24 ministers, though several, including the defense minister, were missing from Thursday’s ceremony. The prime minister explained that they were out of Tripoli, some of them attending to personal preparations in their hometowns before taking up their new posts.

One member of the transitional council, Taher Diab, called it a historic moment and said the new leaders were “overjoyed.”

“We are happy that we have arrived at this day after longs years of struggle,” he told The Associated Press.

“The challenge is more than it was before,” he said. “The rehabilitation of the country — building Libya is not an easy task.”

But, he declared: “We are prepared for it.”

El-Keib pledged to represent the interests of all Libyans in the country’s struggle for unity.

“I am a son of all Libyans,” he said. “I will represent everyone and share wealth with everyone.”

Among the institutions that must be built is a justice system that will be able to put on trial two key members of the Gadhafi regime — Seif al-Islam Gadhafi, the dictator’s recently captured son and one-time heir-apparent, and the ex-intelligence chief, Abdullah al-Senoussi.

The International Criminal Court has charged them both with crimes against humanity for alleged atrocities committed during the recent civil war.

Libyan authorities insist that they be tried in Libya and not at the court in The Hague, Netherlands, a decision aimed at asserting their national authority. However, they have promised to work with the ICC and the United Nations in investigating the alleged crimes.

ICC prosecutor Luis Moreno-Ocampo told The Associated Press on Thursday that the court received the formal pledge of cooperation in a letter from Abdul-Jalil.

Moreno-Ocampo said he was satisfied with that move, which appeared to settle a dispute between the international court and Libyan authorities over which body should try Seif al-Islam Gadhafi.

Moreno-Ocampo said the most important thing is for “face of the old regime” to face justice.

He said investigations are under way into the alleged crimes committed by Gadhafi’s son and that he believed it would be ready for trial in a few months.

Seif al-Islam was captured on Saturday and is being held by fighters from the Libyan town of Zintan, who flew him there after his arrest in the south. He appeared to be in good health despite a hand injury, according to the International Committee of the Red Cross, which visited him Tuesday. There have been concerns about his health, because his father was killed after being captured Oct. 20.

Officials with the NTC have reported that al-Senoussi, the former intelligence chief, has also been captured. But some later cast doubt on that assertion, and his whereabouts are not known.