Fatah, Hamas leaders talk unity but no sign of progress 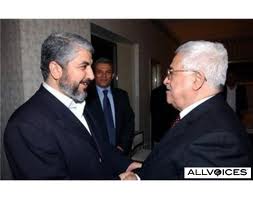 The leaders of Fatah and Hamas met for the first time in six months on Thursday and hailed progress toward ending Palestinian divisions that has led to separate governments in the West Bank and Gaza Strip, but there was no sign of a breakthrough.

The last meeting between President Mahmoud Abbas and Hamas leader Khaled Meshaal in Cairo in May yielded an agreement aimed at reuniting the Palestinian territories under a single government that would oversee new elections set for May 2012. There has been no progress towards implementation since then.

Hamas defeated Fatah in a 2006 parliamentary election and has run the Gaza Strip since 2007, when it seized control of the territory from the Abbas administration.

Since then, the Iran- and Syria-backed group has built its own government and security forces, complicating any attempt at reuniting Gaza with the Western-backed Palestinian Authority.

Abbas, in comments carried by the Palestinian news agency WAFA, said there were “no differences between us now”. Meshaal, who lives in exile in Damascus, said, “We have opened in a new page of partnership.”

Azzam al-Ahmed, a senior Fatah official, said the leaders would hold another meeting to continue discussions on the new government and other issues.

Abbas wants the head of his Ramallah administration, the independent former World Bank economist Salam Fayyad, to stay on as prime minister. That choice is rejected by Hamas and there has been recent speculation Abbas is now willing to give way.

Fatah and Hamas representatives also said there was agreement that elections should happen in May as agreed in the deal. But analysts doubt whether the vote will happen if the sides have not formed a government by then.

In a sign of some tangible progress, the sides announced that an all-encompassing Palestinian leadership body tasked with reforming the Palestine Liberation Organisation (PLO) would hold its first meeting on December 22. The body was first envisioned by a 2005 agreement among Palestinian factions.

The PLO, led by Abbas, was founded in 1964 and is recognised as the legitimate representative of the Palestinian people internationally.

Hamas is not currently part of the PLO, which is dominated by the Fatah movement. Hamas, which is shunned by the West for its hostility to Israel, believes that joining the PLO would bolster its international standing.

“It’s been a long wait but God willing it will finally happen,” said Izzat al-Rishq, a Hamas official, referring to Dec. 22 meeting.

“This is the start of the participation of Hamas in the PLO,” said Hany al-Masri, a Palestinian political commentator based in Ramallah who has been involved in efforts to foster reconciliation. “It’s not the end of the road, but it’s a step.”

Israel has opposed the Palestinians’ unity efforts. It briefly withheld tax revenues collected on behalf of Abbas’s Palestinian Authority earlier this year in response to the unity agreement.

Israel took a similar step this month following the Palestinians’ successful bid to join the U.N. cultural agency UNESCO. Fayyad said on Thursday that the Palestinian Authority was “fast approaching the point of being completely incapacitated” by Israel’s freeze on tax revenues.