by yalibnan
1916
Egypt's revolutionaries can point to the moment their revolution began to go astray: It was the day of their greatest victory.. the day when the army stepped in to take Mubarak's place.
Share: 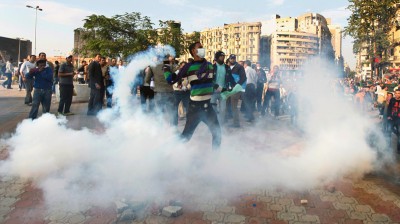 Egypt’s revolutionaries can point to the moment their revolution began to go astray: It was the day of their greatest victory, when protesters ecstatic with the fall of President Hosni Mubarak cheered the army that stepped in to take his place. “The army and the people are one hand,” they chanted.

In the nine months since, the ruling generals — all appointees of Mubarak and diehards of his rule — have kept an iron grip on a process that revolutionaries had hoped would mean the dismantling of the old regime in a transition to democracy. The military has solidified its hold, giving itself overwhelming powers while governance of the country has faltered, leaving Egyptians worried about turmoil in the streets and a faltering economy.

The youth groups that engineered the 18-day uprising against Mubarak that began Jan. 25 have been squeezed out, marginalized and isolated.

“We should not have left the streets. We handed power to the military on a silver platter,” said Ahmed Imam, a 33-year-old activist, of the January uprising. “The revolutionaries went home too soon. We collected the spoils and left before the battle was over.”

Months of anger over the military’s handling of the transition period boiled over this weekend, sparking clashes in Cairo’s Tahrir Square that left more than 20 protesters dead and hundreds wounded.

The demonstrators were initially demanding the military quickly announce a date for the handover of power to a civilian government, but the mood shifted Sunday after an attempt by security forces to clear the square. Now, protesters say the ruling generals are nothing more than an extension of the Mubarak regime, and are calling on military ruler Field Marshal Hussein Tantawi and his council of generals to step down in favor of an interim civilian administration.

Elections to choose the first post-revolution parliament, starting on Nov. 28, promise to be the nation’s first fair and clean vote in living memory. But instead of a sense of joy and excitement, Egyptians seem more thrown into confusion. The electoral system is cumbersome and complex and voting is spread out over months. Many are unclear over who is running.

Islamic fundamentalist parties — particularly the powerful Muslim Brotherhood — are expected to come out the biggest winners in the vote and grab a plurality of parliament seats. But no matter who wins, there are doubts whether the next government to be formed will be strong enough to challenge the ruling generals, who will remain in place and have resisted major reform.

Already, the military is seeking to manage the main priority for the next parliament — the formation of a panel to write a new constitution. The ruling Supreme Council of the Armed Forces has demanded a political role for themselves as “protectors” of the constitution, provisions that would keep the military budget secret and a veto power over the body drafting the constitution.

When a president is elected — a vote is initially set for late next year or early in 2013 — the occupant of the land’s highest office is likely to be beholden to the generals, either because he will have a military background or because they may by then have more sweeping powers than him.

“If I had left Egypt on the eve of the revolution on January 24 and returned today, I would not have known that a revolution had taken place except for the lack of security and the deteriorating economy,” Nobel Peace laureate Mohamed ElBaradei, a prominent reform proponent, said during a TV talk show appearance last week.

It’s a stark contrast to the atmosphere in Tunisia, where the Arab Spring began with protests that led to the Jan. 14 fall of its longtime strongman Zine El Abidine Ben Ali. Elections there in October saw an outpouring of enthusiasm and optimism as voters flocked to the polls. Islamists emerged the strongest party from Tunisia’s elections, but even liberals who worry about increasing religious sway saw the vote as a democratic victory.

Significantly, Tunisia’s military played almost no role in the transition, fading into the background as a civilian interim government managed the country post-Ben Ali. Political parties and reform-minded figures had a voice in the system through the 150-member High Committee to Realize the Goals of the Revolution, which acted as a quasi-legislative body. Authority was clearly centered with civilians that the public was free to challenge and criticize.

In Egypt, the civilian government has been little more than “secretaries” for the Supreme Council of the Armed Forces, the military’s command body, as ElBaradei put it. The council has been secretive, issuing sometimes cryptic decrees, cracking down on critics and seeking to discredit groups behind the uprising and turn the public against them by depicting them as “foreign-run.” The generals have put at least 12,000 civilians on trial before military tribunals and have been accused of torturing detainees.

The military’s prestige was dealt a heavy blow by clashes during a Coptic Christian protest on Oct. 9 that left 27 people, mostly Christians, dead. Videos showed soldiers mowing demonstrators down with armored vehicles. The military tried to deny its troops opened fire or intentionally ran over protesters, and blamed the Christians and “hidden hands” for starting the violence.

Moreover, the generals have decided to enforce Mubarak’s deeply hated emergency laws, dragged their feet or outright failed to dismantle some of the darkest aspects of the Mubarak regime. For example, they have allowed the hated state security agency, blamed for the worst abuses under the deposed leader, to retain most of its officers after dissolving and renaming it or resisting calls to bar members of Mubarak’s ruling party from public office.

“They have grown hostile toward us and their rhetoric is always full of references to foreign conspiracy, paranoia and xenophobia. I think they are convinced that Egyptians are not qualified for democracy,” said rights activist Hossam Bahgat of the military.

Liberals have been debating where they went wrong, with some saying they should have kept up the movement in the streets. Protests have continued since Mubarak’s fall, but on a much smaller scale. They have forced the military to back down on some of its actions, but in general political movements have struggled to unite on an agenda for the protests — with the Muslim Brotherhood in particular largely staying out of them except on the occasional issue that enflames its leadership. Some of the liberals’ rallies have been hard hit by crackdowns by the military.

“Simply put, the revolutionaries did not know their own points of strength and weakness at the key moment when the president stepped down,” said Negad Borai, a rights lawyer and activist. “They were not up to that historic moment.”

Other activists believe the revolutionaries were wrong not to move quickly to channel their popular appeal into strong political parties. The refusal by many of the revolutionaries to sit down and talk with the generals, they say, distanced them from decision-making.

“Their uncompromising rejection of the military and their isolation from the street have turned them into something of an Internet elite,” said Mustafa el-Naggar, a prominent activist and co-founder of a new political party, el-Adl, or Justice.

Still, some revolutionaries are optimistic. They argue that the generals were likely to fail to revive the economy, hard hit by the fallout from the uprising, or restore law and order to the streets. The failures, they argue, will eventually force them to return to their barracks and allow a democratic process led by civilians or else face a new popular backlash.

The military’s biggest fear appears to be that for the first time a civilian could try to wield authority over it. Since the 1952 coup that overthrew the monarchy, all of Egypt’s four presidents have come from the military, allowing it to build up an unquestioned state-within-a-state, with major business interests and political power, with many of the country’s provincial governors and heads of major and strategic facilities such as sea and airports coming from the military.

The increased economic hardships facing most Egyptians along with the tenuous security have driven many in the country to wonder whether the revolution was a good thing after all. Crime rates have hit highs not seen in years, sectarian violence has been on the rise too and the police are yet to fully take back the streets 10 months after they vanished in circumstances not fully explained to this day. The military has used that sentiment to depict itself as the nation’s savior.

It’s all a far cry from the romanticism and idealism of a revolution staged by a people long disparaged for their apathy.

During the heady days of the uprising, protesters dreamt of democracy and freedom in an Egypt rid of decades of authoritarian rule that repressed freedoms, rigged elections and turned a blind eye to torture and corruption. In Tahrir Square, the Cairo roundabout that was the center of the protests, their notion of what Egypt should be like — sectarian harmony, diversity and self-reliance — was put to practice.

“Every one of us saw the Egypt we wanted right there in the square,” says activist Ahmed Ghamrawy. “My best moments came when I saw protesters picking up trash, distributing food or saying ‘sorry’ when they bump into you.”

Prominent columnist and activist Bilal Fadl says the revolution succeeded in bringing the masses “into the political equation for the first time.” But then, he said, it failed to keep that bond with the public.

“The biggest mistake of the revolution is that it has failed to communicate with the street.”