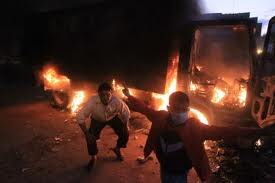 Clashes erupted in Cairo for a third day after fighting between security forces and demonstrators protesting military rule left at least 22 people dead, a week before Egypt’s first parliamentary elections since the ouster of Hosni Mubarak.

Protesters were driven back by tear gas in Tahrir Square, the center of the uprising that toppled Mubarak in February, some waving Egyptian flags and others hurling stones at riot police, in scenes televised from the site. Besides those killed, hundreds were injured in the fighting that started on Nov. 19, Health Ministry spokesman Mohammed el-Sherbeeny said today by telephone.

The events in the square recalled the clashes between police and demonstrators during the anti-Mubarak uprising and have threatened to disrupt elections scheduled to start on Nov. 28 as tensions rise between activists and the ruling military council. Egypt’s government is trying to secure financing to support an economy still struggling to recover from the revolt.

This afternoon, demonstrators staged a march through Tahrir Square, chanting “The people want to topple the field marshal,” referring to Mohammed Hussein Tantawi, the head of the military council that took power from Mubarak. Television footage showed protesters carrying away at least one person who appeared to be wounded or dead.

The elections will go ahead as planned, state television reported yesterday, citing Mohsen el-Fangary, a member of the governing military council. The Cabinet held a meeting today to discuss the violence.

“If the military council fired the Cabinet, restored security and announced a road map for the transitional period with a timeframe, calm will return to the street and people will be assured that their revolution was not stolen,” Emad Gad, an analyst at the Al Ahram Center for Political and Strategic Studies in Cairo, said by telephone late yesterday. “There needs to be a political solution.”

Gad is a candidate for parliament with the Egyptian Bloc, an alliance of secular parties.

In a statement read on state television yesterday, the military council said it is not seeking to prolong the transition to civilian rule and that it won’t allow anyone to derail the country’s “democratic transformation.”

The parliamentary elections are the first step in that process, the council said. It called on all groups to avoid violence.

The Muslim Brotherhood, whose political party is likely to win one of the largest bloc of seats in the parliamentary elections, said in an e-mailed statement that it won’t allow the elections to be postponed or canceled “whatever the price may be.” It also said the transitional period during which the military council governs the nation must end by mid-2012.

“We are torn between two desires, a desire to go back to normality to form a strong government that would lead Egypt and get us out of this turmoil, and the fact that the Muslim Brotherhood is bullying all democratic forces and liberal forces by trying to enforce their presence,” Egyptian billionaire Naguib Sawiris said today on Bloomberg Television’s “The Pulse.”

The council has indicated it may remain in power until 2013, until the drafting of a new constitution and the election of a president. No date has been announced for presidential elections.

“The people want to topple the field marshal,” the protesters yelled. “We won’t leave; let him leave.”

Security forces streamed into the square to clear it, setting fire to tents where protesters had camped out, said Anjali Kemat, a journalist who was there at the time. Scattered fires lit the night sky as thick plumes of smoke rose into the air, footage showed.

“There was massive violence being used” by security forces, she said. Kemat said she saw two civilians lying on the ground who appeared to be “dead or unconscious.”

Security forces managed to disperse the demonstrators briefly before protesters made their way back into the plaza.

“The Interior Ministry has not changed and the regime has not changed,” said Hamed Mohammed, a 41-year-old protester with a bandage over his forehead, which he says was hit by a rubber bullet. He won’t leave the square until “the field marshal leaves,” he said late yesterday.

Protesters led by Islamists on Nov. 18 demanded speeding up the power handover to a civilian government and rejected proposed government-sponsored constitutional guidelines with articles that they say enshrine a political role from the military and shield it from civilian scrutiny.

Political turmoil in Middle Eastern and North African countries, which also toppled leaders in Tunisia and Libya this year, has led to crackdowns on anti-government demonstrations and hurt regional economies.

Egypt’s economy grew 1.8 percent in the fiscal year that ended on June 30, its weakest performance in at least a decade.

The country yesterday sold 2 billion pounds ($334 million) of the 3.5 billion pounds it sought in nine-month treasury bills at an average yield of 14.705 percent, the highest since Bloomberg started tracking the data in 2006.

“The few foreigners that are still invested in Egyptian debt are likely to leave,” Moustafa Assal, Cairo-based head of fixed income at Beltone Financial Holding, said by telephone. “The increase in yields isn’t enough to compensate for the instability. Confidence is very weak in the state.”