Syrian FM: Problems in Syria are our own and we will solve them 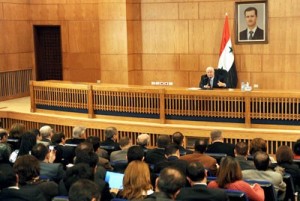 Speaking Sunday at press conference in Damascus shortly after the Arab League rejected Syria’s proposed amendments at AL peace plan to end the country’s unrest, Syria’s foreign minister Walid al-Moallem questioned Arab League’s right to impose sanction on Syria and said some Arab parties want to use the Arab League as a tool to reach UN Security Council. A possible reference to what happened in the Libyan situation.

Moallem said Sunday the proposed Arab League mission gave excessive authority to the observers and violated Syria’s sovereignty. He denied Damascus had sought to restrict the observers’ movement within Syria, but declined to give further details.

“The Arab League’s protocol disregards any coordination with the Syrian side… We dealt positively with the proposed protocol, despite it containing terms that were impossible to implement.” Moallem declared on Sunday.

He added “Problems in Syria are our own and we will solve them in Syria.”

He said Syria will send a reply to the Arab League secretary general asking for clarifications on why the proposed amendments were rejected, because what is happening in Syria “Syria cannot afford reactionary actions or rushing to answers.”

“Arab commission will be allowed to meet with opposition members in Syria.” he added.

Moallem downplayed the expiry of the Arab deadline, saying an agreement is still possible‎.

When asked if opposition would accompany monitors, Muallem said “No one can take the role of the Syrian state or duties.”

Debating journalists at press conference, Moallem indicated “Pressures we are facing are not only Arab or Muslim. They are American and European pressures.”

When asked about Lebanon political affect at Syria, Syrian FM answered “Lebanon is a brotherly country and it has a special relation with Syria and I don’t want to say anything else so that I don’t get misinterpreted. There are sides in Lebanon claiming to be an opposition, but there are unchangeable facts.” A possible reference to the complete domination of the Lebanese government by its ally , Hezbollah.

He said that Syria does not need any logistical support from any Arab country and is coordinating all its actions with its Russian friends.

Answering about reports that predict a civil war in Syria, Moallem refuted all Turkish and U.S. statements and stressed “Our people are capable of defending themselves and there won’t be a civil war.”

“We have not arrived at the situation of a civil war yet and I hope we never do. We are fighting armed insurgents.” he concluded.