Palestinian president to meet Hamas leader in Cairo next week 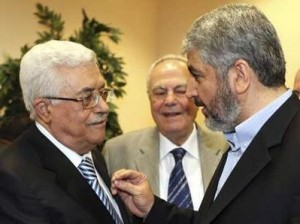 The meeting, which is expected to take place in Cairo, will include discussion of the reconciliation agreement that rival factions Fatah and Hamas signed in May, which was supposed to set the ground for reuniting the West Bank and Gaza Strip under one leadership.

Talks would also include the formation of a government of technocrats to prepare for presidential and legislative elections, which could take place in May, Abbas said at a memorial event in Ramallah in honor of the late Palestinian leader Yasser Arafat.

Abbas had wanted his current prime minister, Salam Fayyad, who has strong Western backing, to run the new government, but Hamas strongly objected.

Reconciliation with Hamas could be costly to the Fatah-led Palestinian Authority because of U.S., European and Israeli opposition to the group. The U.S. is among the countries that consider Hamas a terrorist organization. The Islamic militant group refuses to recognize Israel or renounce violence.

Abbas stressed that the U.S. and President Obama remain friends of the Palestinian people in spite of their strong support for Israel.

“The U.S. helps us financially and it provides us with considerable amount of aid,” he said. “Therefore, it is considered our friend.”

Abbas called on the U.S. to play a balanced role in resolving the decades-old Palestinian-Israeli conflict. He said he expects to discuss the future of the Palestinians’ political course with Meshaal.

“We will have to answer the question: Where are we going?” he said.