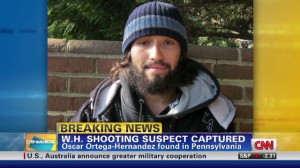 An Idaho man wanted in connection with a White House shooting incident was arrested Wednesday in western Pennsylvania, police and the U.S. Secret Service announced.

Oscar Ramiro Ortega-Hernandez, who was detained by Pennsylvania State Police, was allegedly involved in a shooting Friday night that may be responsible for two bullets found at the White House, according to the Secret Service.

One bullet hit a window and was stopped by bulletproof glass, and another was found on the White House exterior, the Secret Service said. Both bullets were found Tuesday.

Ortega-Hernandez is to appear in federal court in Pittsburgh at 2 p.m. Thursday, according to the Justice Department.

Lt. Brad Shields of the Pennsylvania State Police identified the arrested man as Oscar Ortega-Hernandez, 21, originally from Idaho. Ortega-Hernandez was being questioned by federal authorities, Shields said at a news conference.

Ortega-Hernandez was arrested under a U.S. Park Police warrant issued Sunday in Washington “based on a shooting that occurred at the White House on November 11,” Shields said.

According to Shields, a tip came in Wednesday that the man sought by federal authorities in the Washington shooting was at a Hampton Inn in Indiana, Pennsylvania.

Ortega-Hernandez had stayed at the hotel with another person for a few days before the Friday shooting incident, Shields said.

When Ortega-Hernandez returned to the hotel on Wednesday, staff members recognized him from a photo provided by authorities and notified police, Shields said.

Ortega-Hernandez was arrested without any resistance in the hotel lobby, asking why he was being detained, Shields said. A bag of his was checked by sniffer dogs, but no weapons were found, according to Shields.

The suspect apparently returned to the hotel to locate what Shields called “his friend,” and Shields said the suspect’s companion was not from the area. He provided no further details of the companion’s identity or whereabouts.

The bullets were found on the south side of the White House, a Secret Service official not authorized to speak on the record told CNN.

Within five minutes, officers located a vehicle in the 2300 block of Constitution Avenue, according to the statement.

A weapon registered to Ortega-Hernandez was found in the car, according to a law enforcement source familiar with the investigation.

The Secret Service interviewed people who know Ortega-Hernandez, and determined he had a “direction of interest toward the president and the White House” — a term that does not suggest a direct specific threat.

The FBI, the Bureau of Alcohol, Tobacco, Firearms and Explosives, and the Metropolitan Police Department all took part in the search for Ortega-Hernandez, officials said.

“There’s always an outer perimeter and this was on the very outer perimeter of our security,” the Secret Service official said. “The gun and car were found within several minutes. We have a lot of security — a lot of layered security down there, and the security worked.”

A law enforcement official familiar with the investigation said when the shots were heard Friday night, there were reports of tires screeching and cars racing.