Golan sold to Israel before 67 war by Assad’s father, uncle? 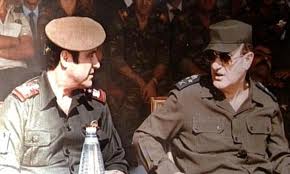 Dr. Mahmoud Jame’, a close friend to late Egyptian President Anwar Sadat has recently raised an interesting issue when he said that Sadat was briefed on the secret that the Golan Heights were actually sold to Israel in ahead of the 1967 War in exchange for US$100 million.

Dr. Jame’, a member of the first Consultative Council in Egypt, and author of the book “I Knew Sadat”, said that the money was received by Rifaat al-Assad and his brother Hafez Assad, the former Syrian president. The check was deposited in a Swiss bank.

Jame’ went on to say that, “one morning Sadat took me with him in private and without a guard to the (Syrian part of the) Golan Heights, and I swear by the Almighty God that he put his hand on my shoulder and as we were standing on the Golan Heights, he told me literally: Look Mahmoud This is the Golan, can any power seize it so easily, even if it is Israel?” And Jame’ said, “I said to Sadat this is impossible, he said to me I will tell you a dangerous secret, the Golan Heights were purchased by Israel for $100 million. The check was received by both Hafez and Rifaat al-Assad and deposited in their accounts in a Swiss bank.”

The price in return was that Syrian Defense Minister at the time, Hafez Assad, order the Syrian forces to withdraw immediately from the Golan Heights in the June 1967 war without firing a single shot and handing it over to Israel. “This story and my testimony of this event, has been kept secret for many years until1999, when I alluded in the book “I Knew Sadat” to the incident without revealing the full details. In 2006, when I was hosted by Almihwar channel, I provided the full details frankly, to the extent that even Moataz was stunned,” the Egyptian writer said.

“The next day, Almihwar hosted Mr. Amin Gemayel, Lebanon’s former president, and the subject was raised with him. He supported my words. Then the Beirut-based Future channel tried to invite me to Beirut to discuss the subject, but I apologized, and refused,” he added.

Syrian sources dismiss the Egyptian writer’s claims. They claim this “baseless” story is part of a smear campaign against the Assad regime.