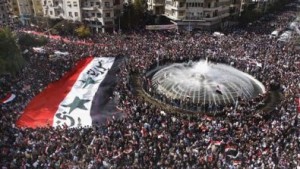 Tens of thousands of pro-regime demonstrators gathered in a Damascus square Sunday to protest the Arab League’s vote to suspend Syria over its bloody crackdown on the country’s eight-month-old uprising.

The Syrian government has called for an urgent Arab summit to discuss the deepening political unrest in the country.

An official statement aired on state-run television Sunday said Syria would welcome a visit by Arab League officials before Wednesday, when the League suspension is to take effect.

The 22-member bloc’s vote on Saturday was a stinging rebuke to a regime that prides itself as a bastion of Arab nationalism and left it increasingly isolated over its crackdown on an eight-month uprising that the U.N. estimates has killed more than 3,500 people since mid-March.

Angry pro-regime protesters on Saturday night broke into the Saudi and Qatari embassies to protest the vote, which is likely to stoke further anger in the two Arabian peninsula states against the regime in Damascus.

Arab disapproval in itself may not seriously damage President Bashar Assad’s hold on power, but if Syria antagonizes Gulf states much further, it risks having them build up the Syrian opposition into a unified body which can win international recognition as happened during Libya’s civil war earlier this year.

Syrian security forces had confronted Saturday’s protesters with batons and tear gas but were unable to stop a group from breaking into the Qatari embassy and bringing down the Qatari flag, replacing it with the Syrian flag. Others entered Saudi Arabia’s embassy compound, broke windows, and ransacked some areas, the kingdom’s media reported.

The Saudi embassy was operating on Sunday, an operator said. The kingdom strongly condemned the attack in a statement by the foreign ministry and said it held the Syrian authorities responsible for protecting its interests.

Saudi King Abdullah had recalled the Saudi ambassador to Syria in August and had condemned Assad’s crackdown. Kuwait and Bahrain also have recalled their ambassadors.

Saturday’s Arab vote came after Damascus failed to carry out a Nov. 2 peace deal brokered by the Arab League that called on Syria to halt the attacks and pull tanks out of cities.

More than 250 Syrian civilians have been killed so far this month, including more than 18 on Saturday in attacks in the restive city of Homs, the Damascus suburbs and elsewhere, according to activist groups.

President Barack Obama praised the Arab League, highlighting what he called the group’s leadership in seeking to end attacks on peaceful protesters. “These significant steps expose the increasing diplomatic isolation of a regime that has systematically violated human rights and repressed peaceful protests,” he said in a statement.

Arab League diplomats, speaking on condition of anonymity because they were not authorized to brief reporters, said that if Syria does not adhere to its demands, the organization will work to unify the disparate Syrian opposition into a coalition similar to that of Libya’s National Transitional Council. A next step would be to recognize the opposition as the sole representative of the Syrian people in a move that would symbolically isolate Assad’s regime even further.

The Arab League will monitor the situation and revisit the decision in a meeting Wednesday in the Moroccan capital, Rabat, Qatar’s Foreign Minister Hamad bin Jassim said, a move that appeared to give Assad time to avert the suspension.

In his statement, bin Jassim called on all factions to meet later this week to unify their message as a step toward dialogue with the Syrian government, but many within the opposition refuse to negotiate with the regime.