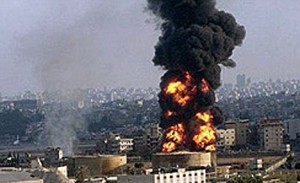 A senior general who pioneered an artillery and missile unit was among those killed in a munitions blast that ripped through a base of Iran’s elite Revolutionary Guards, a Sunday statement said.

The explosion on Saturday rocked the base at Bid Ganeh, near the town of Malard on the western outskirts of Tehran, some 20 kilometres (12 miles) from the city, according to media reports.

Guards spokesman commander Ramezan Sharif said 17 members of the force were killed, and several others injured, adding that the blast occurred as “ammunition was taken out of the depot and was being moved outside toward the appropriate site.”

Sunday’s Guards statement did not explain why Moqaddam was present at the site but it insisted his work would be continued.

Set up after the 1979 Islamic revolution to defend Iran against internal and external threats, the Guards are in charge of the Islamic republic’s missile programme, including Shahab-3 missiles with a range of 2,000 kilometres (1,200 miles) capable of hitting Israel.

Despite four sets of UN Security Council sanctions, Iran has refused to abandon its nuclear and missile programmes.

Saturday’s blast came amid a spike in international condemnation of Iran following the release of a new UN nuclear watchdog report accusing Tehran of working towards the development of nuclear warheads to fit inside its medium-range missiles.

Israeli officials in past weeks have warned Iran of the possibility of military strikes against its nuclear sites.

US military experts in late October suggested in Congress that the United States organised covert operations to assassinate the commanders of the Revolutionary Guards.