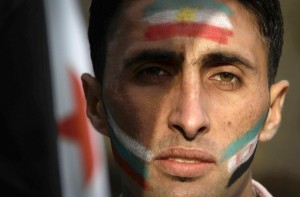 Protesters across Syria marched Tuesday in solidarity with the besieged city of Homs, opposition activists said, as the United Nations reported that the death toll in almost eight months of conflict had reached at least 3,500.

Behind the bloodshed is “the brutal government crackdown on dissent,” Ravina Shamdasani, a spokeswoman for the Office of the U.N. High Commissioner for Human Rights, said from Geneva.

Syrian President Bashar Assad blames says militants, allegedly armed and funded from abroad, are responsible for the violence. Damascus says “terrorists” have killed more than 1,000 security personnel in a campaign of assassinations, kidnappings, bombings and sabotage.

The 3,500 deaths reported by the U.N. agency includes both civilians and military defectors who joined the opposition, Shamdasani said.

The figure does not include slain government security personnel, the spokeswoman explained, because the information provided by Damascus could not be corroborated.

Protests against Assad’s autocratic rule have assumed the character of an uprising in some parts of Syria. But the president still maintains considerable support, especially in Damascus, the capital, and Aleppo, Syria’s second city.

However, the third-largest city, Homs, has been a focal point of protests and government crackdowns, even after an Arab League-brokered peace plan was approved last week. The plan calls for the withdrawal of government forces from populated areas, the release of prisoners and dialogue between the two sides.

The opposition says the government has ignored the pact. Damascus says it has already released hundreds of prisoners and offered an amnesty for arms violators who surrender. The Obama administration has urged Syrians not to turn themselves in for the amnesty, enraging the Syrian government.

Damascus has deployed tanks and heavy weaponry to attack the protesters’ strongholds in Homs, according to the opposition, which declared the town a “disaster area” and called for international humanitarian intervention.

At least 11 more people were killed Tuesday across Syria in political violence, the opposition said. Among the dead, according to an opposition group, was Mohammad Falaha, 22, a soldier who allegedly was executed for refusing to fire at protesters.

The opposition account of the deaths could not be independently verified.