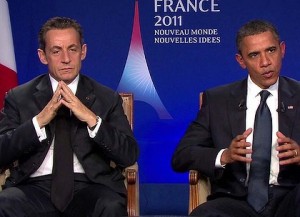 A candid moment between French and US presidents has laid bare the testy relationship between Benjamin Netanyahu and Israel’s allies, and underscored the lingering discord between the White House and the Israeli Prime Minister.

According to French journalists, who overheard the exchange, Mr Obama obliged, responding: ”You’re sick of him, but I have to work with him every day.”

The loose remarks reflect mounting international frustration with the stalled Middle East peace process, as well as a barely concealed animosity between Mr Obama and Mr Netanyahu, who have struggled to stay in step over how best to advance peace.

The gaffe gave Mr Obama’s Republican opponents ammunition and prompted a ticking off by the pro-Israel Anti-Defamation League, which expressed concern over the extent to which the two men’s ”private views” might inform US and French policy towards Israel.

”We hope that the Obama administration will do everything it can to reassure Israel that the relationship remains on a sure footing and to reinvigorate the trust between President Obama and Prime Minister Netanyahu, which clearly is not what it should be,” the league’s national director, Abraham Foxman, said.

Republican presidential wannabe Michele Bachmann demanded Mr Obama apologise, linking the incident to the administration’s lax efforts to protect Israel from the nuclear ambitions of Iran and other ”tragic errors” of the president’s foreign policy.

The uneasy relationship between the leaders was most on show in May when Mr Netanyahu lectured Mr Obama before reporters in the Oval Office, after the President had raised the prospect of a return to Israel’s pre-1967 borders as a means of advancing the peace process.

The President sat disconsolately as Mr Netanyahu flatly rejected the idea and appeared to patronise Mr Obama by offering a history lesson. ”While Israel is prepared to make generous compromises for peace, it cannot go back to the 1967 lines,” he said.

In an earlier meeting, Mr Obama reportedly sat down to dinner, making the Israeli leader wait in another room at the White House. Last Thursday’s exchange was overheard when microphones were switched on prematurely. But most journalists who caught the private remarks observed a French media tradition respecting them as ”off the record”.

However, a website broke ranks yesterday, prompting a frenzied debate. According to the reports, Mr Sarkozy, who has been working to improve relations with Israel despite France’s traditional and more conspicuous support for Arab states, said in full: ”Netanyahu, I can’t stand him. He’s a liar.” Although Mr Obama’s response was ambiguous, reporters insisted their effect was to concur with Mr Sarkozy.