by yalibnan
875
The mother of all regional massacres, the worst bloodbath to have taken place in the Arab world is one that did not receive the appropriate media and moral coverage. I am talking about the terrible massacre carried out by the Hafez al-Assad regime in 1982 against the Syrian city of Hama.
Share: 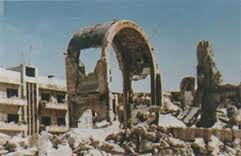 Contemporary Arabs have been raised to be taught the history of Palestine and the atrocities committed by Israel there. The Deir Yassin Massacre is a prime example of this.

According to Palestinian sources, the final death toll of this massacre stood between 250 and 360, whilst Western sources – based on Israeli accounts of what happened – claim that the death toll was only 107. In addition to this, there is the other infamous massacre which took place in Palestinian camps in Lebanon [Sabra and Shatila camps] by Christian militias – with clear Israeli support – and which resulted in between 3,000 and 5,000 deaths.

And of course, there is the Halabja massacre during which the Iraqi Baathist regime utilized illegal chemical weapons against its Kurdish citizens, resulting in 6,000 deaths.

However the mother of all regional massacres, the worst bloodbath to have taken place in the Arab world is one that did not receive the appropriate media and moral coverage. I am talking about the terrible massacre carried out by the Hafez al-Assad regime in 1982 against the Syrian city of Hama, which resulted in the death of approximately 45,000 people, and the disappearance of 15,000 more.

This was a terrible massacre by any standards, during which all kinds of heavy weaponry and arms were used against unarmed civilians. The Syrian regime used tanks, missiles, and even fighter jets in a terrible act of genocide, targeting and levelling entire apartment buildings. The Syrian regime killed the people of Hama in a random and indiscriminate manner.

Mosques were demolished, shops destroyed, and homes burnt down, whilst the streets were filled with corpses. Black clouds filled the sky as a result of the intense bombardment, whilst the Orontes River ran red with blood. Hama was transformed into a desolate graveyard, where the only sounds to break the silence were the moans of the bereaved mothers, and the screams of those trapped under debris. This is just a glimpse of the Hama Massacre; the mother of all massacres. This represents by far the highest price that the Syrian people have had to pay for standing up to the oppressive al-Assad regime. The people of Syria are, in many ways, still paying this price, with interest!

Indeed neither al-Assad senior nor al-Assad junior ever apologized to the Syrian people for this terrible massacre. In addition to this, they continued to pursue a policy of imprisoning or exiling Hama residents.

This is the nightmare that Hama continues to face! The great districts of Hama, named after its generous inhabitants, like the members of the al-Keilani and al-Baroudia families, among others, were destroyed as the city’s inhabitants were subject to humiliation and abuse. Today, the al-Assad regime is seeking to humiliate the people of Hama – and all the Syrian people – once more, through killings, mass arrests, and brutal suppression.

The world committed a grave moral mistake when it failed to firmly, honestly, and forcefully acknowledge and deal with the Hama massacre, and condemn those responsible for this. However today it seems that the international community has become far less tolerant toward the idea of recurring massacres.

The Hama massacre was the gravest criminal and moral mistake committed during the entire history of the ruling Baathist regime in Syria. The fact that the regime was not internationally sanctioned for this massacre encouraged it to continue with its ruthless policy of suppression. However nothing lasts forever; and the Syrian holocaust must come to an end! The responsibility of putting an end to this terrible crime lies with the international community as a whole, and whoever is reluctant to pursue this is nothing more than a criminal accomplice!

(A businessman and prominent columnist, Hussein Shobokshi, is also a former host of the Al Arabiya weekly current affairs program al-Takreer. The article was first published in the London-based Asharq Alwasat on Oct. 28, 2011.)