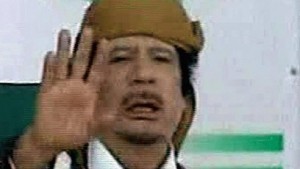 Col Gaddafi’s burial has been delayed by differences among officials about what should be done with the body.

Under Islamic tradition burial should have taken place as soon as possible. But Libya’s oil minister said the remains may be kept “for a few days”.

It is unclear whether the ex-leader will be buried in Sirte, where he was captured on Thursday, in Misrata where the body has been taken, or elsewhere.

Meanwhile Nato is expected to declare an end to its Libya campaign.

“Clearly the operation is coming to its end,” he told reporters.

Nato’s seven-month campaign of air strikes was carried out under a UN mandate authorising the use of force to protect civilians in Libya.

The BBC’s Caroline Hawley in Tripoli says the authorities now have to decide how to deal with Col Gaddafi’s death and in particular his burial.

They have said they will conduct a secret burial and there is some speculation that they might even try to bury him at sea, as happened with al-Qaeda leader Osama Bin Laden, to prevent any grave being turned into a shrine, she adds.

Col Gaddafi’s body is lying in a meat storage room in Misrata. Oil Minister Ali Tarhouni told Reuters news agency it would not be released for immediate burial.

“I told them to keep it in the freezer for a few days… to make sure that everybody knows he is dead,” he said.

Asked about the burial arrangements, he said: “There is no decision yet.”

Our correspondent says the National Transitional Council (NTC) needs to co-ordinate with the fighters who captured him in his hometown of Sirte and who have taken him to Misrata.

Reuters news agency quotes senior NTC commander Abdel Majid Mlegta as saying members of the colonel’s tribe are in contact with anti-Gaddafi fighters to discuss the possibility of taking on the task of burying him.

Meanwhile, questions are mounting as to exactly what happened in Col Gaddafi’s last moments following his capture.

Video footage suggests he was dragged through the streets.

An NTC fighter told the BBC he found the former Libyan leader hiding in a drainage pipe and he had begged him not to shoot.

Misrata’s chief forensic doctor, Othman al-Zintani, told to al-Arabiya TV that full autopsies would be carried out on the bodies of Col Gaddafi and his son Mutassim – who was also killed on Thursday.

The process could take from few hours to a full day, he said.

Senior NTC member Mohammed Sayeh told the BBC he doubted that the colonel was deliberately killed, but added: “Even if he was killed intentionally, I think he deserves this.”

He added: “If they kill him 1,000 times, I think it will not pay back the Libyans what he has done.”

Her spokesman Rupert Colville told the BBC that the killing could have been illegal.

“There are two videos out there, one showing him alive and one showing him dead and there are four or five different versions of what happened in between those two cell phone videos. That obviously raises very, very major concerns,” he said.

“People get killed in wars and that is recognised clearly in international law. On the other hand, it is also very clear under international law that summary executions, extra-judicial killings, are illegal.”

However, our correspondents say few Libyans are worried about the manner of their former dictator’s humiliating end. Celebrations continued late into the night across Libya.

The NTC said it would formally announce the liberation of the country on Sunday in the eastern town of Benghazi, where the rebellion began in February.

Col Gaddafi, who came to power in a coup in 1969, was toppled in August. He was making his last stand in Sirte alongside two of his sons, Mutassim and Saif al-Islam, according to reports.

There are conflicting reports as to the whereabouts of Saif al-Islam.

On Friday he was reported to be fleeing south towards Niger, according to NTC commander Abdul Majid Mlegta.