Gaddafi’s Warning to Other Dictators: Shoot First & Shoot Them All 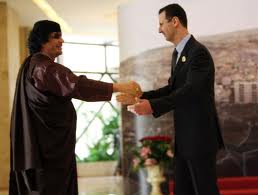 Now that Colonel Gaddafi is dead, there’s a lot stuff flying about Twitter along the lines of Are you watching Mr Mugabe/Assad/Ahmadinejad? I’m sure they are. Few people are likely to mourn Gaddafi’s death but one should not, I fear, suppose that his eclipse weakens other dictatorial regimes or vastly emboldens their respective opposition movements. It would be grand if this were so but foolish to presume it must be.

Indeed, one can plausibly argue that a quite different message has been sent by this Libyan uprising and that this message warns other ghastly regimes to crack down harder and faster to ensure that dissent is suppressed before it has time to build. In other words: Gaddafi’s fate is certainly exemplary but it may actually work against reform. Perhaps this is because it is hard to have just a little reform; once that door is opened there’s little chance of closing it. So better, from the dictator’s perspective, not to open it at all.

Nevertheless, that’s not something the Libyan rebels or their western supporters need concern themselves with. Since I was sceptical about the wisdom and worth of NATO’s Libyan mission one should admit that it has gone rather better than I thought it might. Score one for David Cameron and Nicolas Sarkozy. Even so, the battle is not won yet since Libya will, one suspects, need considerable assistance for years to come if this is to be something other than a temporary triumph.

Nor, actually, does this conflict mean Blair’s government was wrong to try and bring Libya in from the cold. 2011 is not 2001 and the UK (and US’s) interest now is not necessarily the same as it was then. This is an elementary point that many people like to ignore. Nevertheless, there it is. Supporting – or tolerating – bastards until such time as that support becomes impossible or counter-productive is not an especially noble practice but you can’t have everything. Of course, it helps to know when to jump ship too.