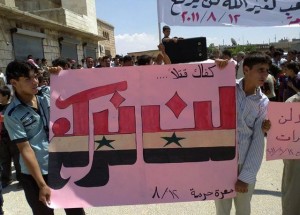 Homs, located some 100 miles (160 kilometers) north of Damascus, has been a hotbed of dissent and mass protests since the popular uprising against Assad’s regime began in mid-March. It has also been the scene of heavy fighting between army defectors and security forces, most recently on Monday, underscoring the difficulty the regime faces in snuffing out protests despite a bloody crackdown that the U.N. says has left nearly 3,000 people dead.

Security forces launched a new assault on Homs over the weekend, and the Local Coordination Committees, an activist group, said shooting has not stopped in the city since late Sunday. An amateur video posted by activists online showed an armored personnel carrier driving through an empty Homs street and firing randomly from a heavy machine gun on top.

Rami Abdul-Rahman, the head of the London-based Syrian Observatory for Human Rights, said two people were killed when troops in Homs opened fire on their car at a checkpoint, while a third was killed by a random bullet. A fourth person died of wounds suffered Monday during a raid by security forces, Abdul-Rahman said.

He added that security forces were snatching suspect protesters from their homes, and detaining people at checkpoints set up on Homs’ streets.

The uprising against Assad began amid a wave of anti-government protests in the Arab world that toppled autocrats in Tunisia, Egypt and Libya. Syria’s opposition movement has until now focused on peaceful demonstrations, although recently there have been reports of protesters taking up arms to defend themselves against military attacks. The trend toward militarization of the uprising has raised fears that Syria may be sliding toward civil war.

The Syrian government has staunchly defended its crackdown in the face of increasing international pressure to end the bloodshed.

Speaking in Malaysia on Tuesday, Syrian presidential adviser Buthaina Shaaban said the government’s offensive was aimed at curbing armed groups sponsored by foreign parties to create chaos in Syria. She did not name elaborate, but sought to stress that Damascus will be able to keep Syria from sliding into civil war.

Syrian officials frequently have said their country is the target of a conspiracy because of Damascus’ support for anti-Israeli groups such as Lebanon’s Hezbollah and the Palestinian Hamas.

Shaaban said the government will “confidently” press ahead with all political reforms, including plans to rewrite the constitution by the end of the year and calling for parliamentary elections in February.

In Damascus, a senior official of Assad’s ruling Baath party said a committee will be formed in the near future whose job will be to review the constitution. Fayez Sayegh did not say when the committee will start its work but added that after it is done with the job, the new constitution will have to be ratified by parliament then a referendum will be held to approve it.

The part of the constitution that many Syrians want amended is section 8 which states that the Baath party is the leader of the nation and the society. Sayegh refused to say whether this part will be amended.

The amendment of section 8 would open the way for the formation of parties besides the Baath and 11 other closely associated parties known as the National Progressive Front.

Still, all such amendments are not likely to appease the opposition that has said it will not accept anything less than regime change.