China warns may be losing patience with Syria 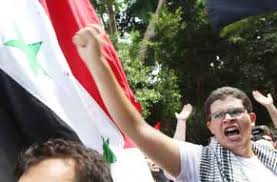 China’s Foreign Ministry on Tuesday signalled that its patience with Syria could be wearing thin, even after it rejected a Western-backed United Nations draft resolution condemning the bloody crackdown in the Middle Eastern country.

“We believe the Syrian government should more rapidly implement their promises of reform, begin and advance as soon as possible a process that is more lenient and inclusive to all parties … and through dialogue appropriately resolve issues,” Liu said.

Liu’s remarks echo statements made by Russian President Dmitry Medvedev last week that Syria’s leaders should step down if they cannot enact reforms.

Both Russia and China drew criticism from the West after they joined forces last week to veto a European-drafted U.N. Security Council resolution condemning Syria for its violent treatment of protesters.

The U.N. says 2,900 people have been killed in President Bashar al-Assad’s response to six months of mainly peaceful protests against his rule.

Liu defended China’s decision on Tuesday, saying the draft resolution “threatened sanctions,” which he added, “is not beneficial to Syria’s stability.”

China, which generally avoids taking a role in the domestic affairs of other nations, has decried foreign pressure on Syria following calls from the U.N. and Europe for Assad to step down, saying the country’s future should be decided internally.

China has on several occasions called on other countries not to get involved, and has kept a relatively low profile in the global response to the tumult sweeping the Middle East and North Africa.

Analysts have said that China will carefully foster ties and trade with new governments across the region, presenting itself as a steadfast friend, and oil customer, of governments that ride out the unrest.