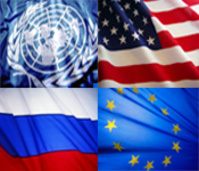 Mideast negotiators will seek ways to restart the moribund Israeli-Palestinian peace process during a meeting planned for this weekend, the European Union said Friday.

The meeting Sunday comes amid international pressure to reach a peace deal, fueled by Palestinian President Mahmoud Abbas’ request two weeks ago that the U.N. recognize an independent Palestinian state. The gathering will include envoys from U.S., European Union, United Nations and Russia, known as the Quartet.

“The purpose is to review progress and keep up the momentum, with the overall objective of encouraging the parties to return to negotiations,” EU spokesman Michael Mann said.

The U.N. Security Council — the only body that can bestow full membership — is reviewing the Palestinian request. But Washington has already pledged to veto any such resolution, saying it would worsen prospects for a peace accord.

Negotiations between the Palestinians and Israel have been on hold since 2008.

Mediators from the Quartet have met sporadically in a so-far fruitless effort to bring the two sides together again.

The Quartet has proposed a resumption in negotiations with the goal of having a peace agreement by the end of 2012.

Israel has accepted the proposal with unspecified reservations while the Palestinians have said they will not return to talks until Israel freezes settlement activity and recognizes the pre-1967 frontier as a baseline for border talks.

But prospects for any substantial progress in resolving the stand-off appear dim after Israel’s latest announcement that it would build 1,100 new housing units in east Jerusalem.

“We don’t expect anything concrete to come out of (Sunday’s) meeting,” said a diplomat from a Quartet nation who could not be named under standing rules.

While Quartet envoys — usually ambassadors — meet frequently, foreign ministers have so far held talks only three times this year, including on Sept. 23 in New York.