Minorities have nothing to fear in post-Assad Syria, Interview

by yalibnan
634
In this interview the secretary-general of Syrian Salafist group Al-Muamineen al-Yousharikoun (The Believers Participate), insists that minorities having nothing to fear in a post-Assad Syria...all should be allowed to play a role.
Share: 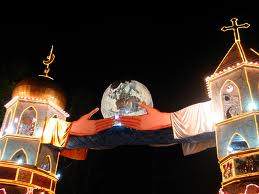 Six months into the uprising against the rule of Syrian President Bashar al-Assad, the confrontation continues to be defined mainly as one pitting the country’s majority Sunni population against the minority Alawites – adherents of a Shiite offshoot who form the backbone of the regime.

The country’s other sects – the Christians, Druze, Ismaelis – generally have stayed on the sidelines, nervously pondering a future that some fear may echo the sectarian strife that plagued Iraq from 2003.

But Sheikh Louay al-Zouabi, the secretary-general of Syrian Salafist group Al-Muamineen al-Yousharikoun (The Believers Participate), insists that minorities having nothing to fear in a post-Assad Syria and that all should be allowed to play a role.

Still, as a veteran “Arab Afghan” who fought the Soviet occupation of Afghanistan, lived in Sudan at the same time as former Al Qaeda leader Osama bin Laden, waged jihad in Bosnia in the mid 1990s, and spent six years in a Syrian jail, he has a tough sell ahead of him if he is to convince the skeptics.

The Monitor recently talked with Mr. Zouabi at a safe house in north Lebanon.

CSM: Many Syrians, especially those from minority communities, are scared that if the Assad regime falls, the country may slide into sectarian chaos similar to neighboring Iraq. They are worried that the majority Sunni community may not look after their interests once the Baath Party’s secular regime is removed.

ZOUABI: What I am trying to do is to stand up and talk to the entire world. Yes, I have been to Afghanistan and Bosnia and that means that I am accused of being a radical. The Assad regime is trying to scare the West [by saying] that we want to be the masters of Syria. This is not true. We are willing to share power with everyone – Druze, Alawite, Shia, Sunni, Kurds, Christians. It is not true what the regime is saying about us. Let the whole world know that Bashar al-Assad is lying. We are not hard-liners.

CSM: But you admit that you fought the Soviets in Afghanistan in the 1980s, where you knew many of Osama bin Laden’s key lieutenants, and that you fought in Bosnia in the mid 1990s. Surely you face a tough sell to persuade minority sects in Syria that you are not a militant Islamist.

ZOUABI: I am a salafist, but that is not the same as being Al Qaeda. My views as a salafist are not the same as those of Al Qaeda… I am [like] Al Qaeda except [the difference is] that I am willing to talk [to Christians] and I oppose the killing of innocents. I don’t want to attack any group, whether they are Islamic or not.

CSM: Where do you stand on the Sept. 11, 2001 attacks on the United States and the resistance against coalition forces in Iraq?

ZOUABI: I did not support the Sept. 11 attacks. We don’t want to kill any civilians. This was the difference between us and Al Qaeda. The Iraqi jihad was justified because it was [against] an occupation. I am willing to be friendly with every country, but not with an occupier. We supported the resistance in Iraq, but not the killing of civilians. I met with American officials and I told them that I could be their enemy in Iraq because of the occupation but I could be their friend in Syria when they come as visitors.

CSM: Salafism practices an austere version of Islam and traditionally views other sects, including Shiite Muslims as apostates. Why do you now say that you are not only willing to talk and cooperate with other sects but to treat them as brothers?

ZOUABI: Before one year ago I would have seen you and thought “infidel.” But in the past year, we have studied the Quran closely and reinterpreted some of the verses and have come up with new views. We believe that everyone is equal like brothers. The Christians especially are closest to Muslims.

CSM: The alliance between Syria and Iran, which includes groups like the militant Shiite Hezbollah of Lebanon and Palestinian Hamas, has endured for 30 years and has grown even stronger in the past decade. The removal of the Assad regime threatens to break that alliance, which will have major consequences on the dynamics of the Middle East, particularly in relation to the confrontation with Israel. Do you believe that a future post-Assad administration in Damascus will continue to observe that relationship with Tehran?

ZOUABI: There is no way that we can have a relationship with the current government in Iran. If there is a new regime in Tehran, then maybe. But with Hezbollah there is no chance [of a relationship]. Our No. 1 enemy is [Ayatollah Ali] Khamenei [the supreme leader of Iran] and the Iranian regime. Not the Iranian people, just the regime. Our second enemy is Hezbollah. Our third enemy is the regime of Bashar al-Assad.

CSM: Bashar al-Assad is third? But your struggle is directly against the Assad regime, not Iran and Hezbollah.

ZOUABI: Assad is third because it is natural for him to want to kill me because I am trying to overthrow him. But why do Iran and Hezbollah want me dead? What have I done to them? In 2006 [during the month-long war between Hezbollah and Israel], we welcomed the Hezbollah people [who fled to Syria from south Lebanon] and gave them food, blankets, shelter. We never did anything against them. We gave them everything they needed in 2006, but now they have turned against us. We consider the Iranians traitors because they have taken the side of Bashar al-Assad.

CSM: After six months of protests, Assad is still in power and it seems that the peaceful protest movement is not gaining sufficient traction to topple the regime. There are increasing reports of the opposition taking up weapons and fighting back and army deserters have formed the Free Syrian Army. Many analysts and diplomats predict that the confrontation against the Assad regime will soon become an armed struggle which could lead to civil war.

ZOUABI: Until now we have not issued a fatwa[religious ruling] allowing civilians to shoot, but we have issued a fatwa allowing soldiers [who have deserted] to use weapons to protect civilians. We are asking for the international community to intercede because we are dealing with a regime that shows no mercy, no religion, and no sympathy.

CSM: But the international community has all but ruled out a Libya-style intervention.

ZOUABI: A lack of an international intervention will cause a lot of bloodshed. There will be massacres in Syria.

CSM: That means there will be an armed confrontation.

ZOUABI: For sure. That is why we are working on receiving arms and we hope that international parties will get the message and start providing weapons for us soon. We will not fight as Islamists but as Syrians – Christians, Shiites, Sunnis – all together.