Mikati: Lebanon is committed to int’l resolutions including STL 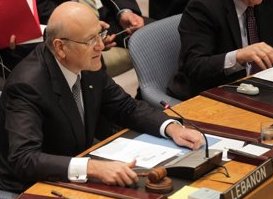 “Lebanon, a founding member of the United Nations, is always committed to [international] resolutions… including the resolution pertaining to the Special Tribunal for Lebanon ” Mikati said

Mikati heads a government that is heavily influenced by the Iranian and Syrian backed Hezbollah which opposes the STL funding .

The tribunal was created by a 2007 UN Security Council resolution, at Lebanon’s request, to try those responsible for former Prime Minister Rafik Hariri’s assassination. He was killed in a suicide car bombing on February 14, 2005.

Four Hezbollah members have been indicted by the UN-backed STL, however, the Shiite group denied the charges and refused to cooperate with the court

Mikati in his speech also demanded the full Israeli withdrawal from Lebanese territories and demanded the international community to hold Israel accountable for fulfilling its duties as specified in UN Security Council Resolution 1701.

“Lebanon demands full Israeli withdrawal from the Lebanese territories that are still occupied, including the Shebaa Farms, Kfar Shouba Hills and the northern part of Al-Ghajar,” Mikati said.

Mikati also told the UN Security Council that “Lebanon is demarcating its maritime borders and exploiting its natural resources in its regional waters.”

The PM praised “the role UNIFIL is playing in the South of Lebanon” and condemned the attacks that targeted it.

“Palestine is an occupied country, and we must strive to establish a Palestinian state and help the Palestinian people to stop the occupation and return to their homeland,” he said.

Palestinian President Mahmoud Abbas called on the United Nations on Friday to admit Palestine as a full member state.

Mikati’s pledge to fund fund g of the Special Tribunal for Lebanon was met with skepticism at home, as politicians voiced doubt about his ability to secure support from the rest of the Cabinet.

“Mikati speaks for himself and not for the government,”March 14 MP Ahmad Fatfat said Tuesday.

“We are waiting to see whether his words are going to be translated into action,”

“Can the prime minister and the president pass the funding bill in Cabinet?” asked Araji.

MP Michel Aoun who is closely allied with Hezbollah renewed on Tuesday his opposition to the Special Tribunal for Lebanon, rejecting all attempts to fund it.

Following the Change and Reform bloc’s weekly meeting he told reporters in response to Mikati’s pledges at the UN Security council :