Defiant ambassador says change is under way in Syria, CNN 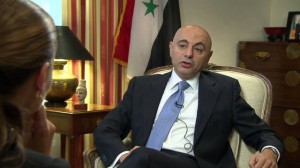 While the United Nations says more than 2,500 people have died in Syria at the hands of the regime, President Bashar al-Assad’s point man in the United States says the figure is false and the result of a conspiracy aimed at Damascus.

“These are blatant lies,” Imad Moustapha, the Syrian ambassador to the United States, told CNN’s Hala Gorani in an exclusive interview Friday. “This is the problem we are facing today in Syria — a massive campaign of disinformation and lies.”

Since the uprising against the Assad regime began in March, few Western media outlets have been granted permission to report from inside Syria. Those who receive visas find independent reporting difficult, as they operate under tight restrictions and are allowed little freedom of movement.

CNN was granted permission to travel to Syria in June, but with minimal travel outside the watch of government minders.

Over the last six months, most of the world has borne witness to the posting of videos on YouTube and other social media websites purportedly showing the Syrian army fiercely putting down pro-democracy protests. Human Rights Watch has interviewed numerous witnesses who offer consistent accounts of security forces using lethal force against protesters and bystanders — in most cases without any advance warning.

“The Syrian regime is not killing its citizens,” Moustapha told CNN, recalling his recent travels to cities like Aleppo and Latakia, where activists have documented aggression from the army online.

“I personally met with demonstrators,” he said, “who told me while we participated in the beginning of the demonstrations because our requests have been about political freedoms, about democracy, now we are not anymore because this is being used by the Western powers and Islamic fundamentalists for their own agendas.”

It is not the army that bears responsibility for the killings inside Syria, a defiant Moustapha said, but rather radical Islamic fundamentalists who are leading the demonstrations, and in the process destabilizing Syria.

“Everybody knows inside Syria and outside Syria that religious groups have started those demonstrations from mosques,” he said. “The same groups that are bragging about September 11th are calling the Mujahedeen of the Islamic world to come to Syria.”

Moustapha said the situation inside Syria is analogous to post-invasion Iraq, with various Islamic factions looking to incite civil war.

To hear the Syrian ambassador tell it, Syria is a country in the midst of massive democratic reform that will soon serve as a beacon to the Arab world, and where those protesting for greater freedoms have nothing to fear.

If you are “about political opposition, about opposing every policy of the Syrian government you are OK, you are welcome,” Moustapha told CNN. “The new laws in Syria allow you to form your own political party. The new media law is the most liberal law in the whole Arab world. This is the new reality in Syria.”

State Department spokeswoman Victoria Nuland has said the United States would like to see “action, not words” when it comes to the discussion of political reform in Syria.

For all the talk of reform and change that may or may not be under way inside Syria, there are still stories like those of Ghiyath Matar. A leader of Syria’s grassroots protest movement, Matar’s brutalized body was returned to his family this month after he had been detained by Syrian authorities. When pressed on Matar’s case, Moustapha denied the Assad regime bore responsibility for his death.

“This man was killed by groups who want to further tarnish the image of the Syrian government,” he said, “because this is their historically unprecedented opportunity to attack the Syrian regime and topple it.”

Moustapha keeps a much lower public profile than that of his American counterpart in Damascus, Ambassador Robert Ford, who has angered Syrian authorities by meeting with pro-democracy activists throughout Syria. But the State Department summoned Moustapha for questioning this summer after reports emerged that Syrian government officials were spotted taking pictures of Syrian-American protesters in the United States.

Since the story broke, many U.S.-based Syrian activists have voiced fear of reprisals against their families as a result of their activities in the United States.

Both the Syrian and U.S. ambassadors have restrictions on their movements. Neither is allowed beyond the capitals of their respective host governments without permission.

While Ford recently traveled to the city of Jassem without prior permission to view anti-government protests there, Moustapha told CNN “if the United States of America doesn’t want me to travel outside Washington, D.C., I will not.”

Despite explicit calls from President Barack Obama and U.S. Secretary of State Hillary Clinton for Assad to step down, Moustapha said he maintains “ongoing” conversations with his American interlocutors. He refused to elaborate on the specifics of those conversations.