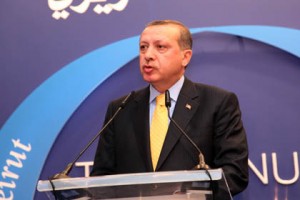 Turkey said Thursday that it would escort aid ships to Gaza and would not allow a repetition of last year’s Israeli raid that killed nine Turks. “Turkish warships, in the first place, are authorized to protect our ships that carry humanitarian aid to Gaza,” Prime Minister Recep Tayyip Erdogan, said in an interview on Al Jazeera television.

“From now on, we will not let these ships be attacked by Israel, as happened with the Freedom Flotilla.” He also said that Turkey had taken steps to stop Israel from unilaterally exploiting natural resources in the Mediterranean. An Israeli Foreign Ministry spokesman, Yigal Palmor, said, “This is a statement well worth not commenting on.”