Interpol has issued an arrest warrant for former Libyan leader Moammar Gadhafi on charges that he has committed crimes against humanity. 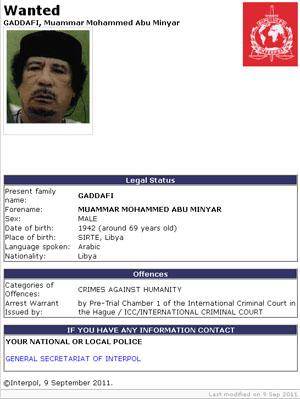 In a statement released Friday, Interpol says it issued a “red notice” for the arrest of Mr. Gadhafi, his son Saif al-Islam and former intelligence chief Abdullah al-Senussi, asking all 188 member countries to help locate and apprehend them.

Gadhafi, whose whereabouts are unknown, has been on the run since anti-regime fighters swept into the capital of Tripoli on August 21.

On Thursday, a Syrian television station aired an audio message purportedly from Mr. Gadhafi, who rejected reports he may have fled the country for neighboring Niger. Gadhafi said his forces are still able to carry out attacks against National Transitional Council fighters, who he called “rats, germs and scumbags.”

Meanwhile, the head of Libya’s provisional government says the battle for liberation is not yet finished, and that the country must be unified in order to rebuild after six months of civil war.

Speaking in his first major address from the capital Tripoli on Thursday, National Transitional Council leader Mahmoud Jibril said there are still some cities in Libya’s south in the hands of forces loyal to ousted leader Moammar Gadhafi. He says a new government can only be formed once fighting ends and the entire country is “liberated.”

NATO said Thursday its warplanes bombed five armored vehicles near Mr. Gadhafi’s hometown, Sirte, as well as 18 surface-to-air missile systems around the town of Waddan, 300 kilometers to the south.

Near Bani Walid, a desert town held by Gadhafi supporters, negotiators from Libya’s National Transitional Council say they are committed to avoiding bloodshed as they press tribal elders tied to the former leader to surrender.