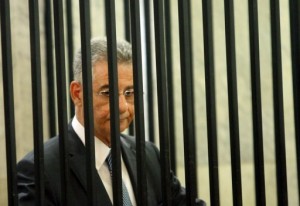 Lebanon’s military court on Saturday sentenced a former army general and high-profile member of a Christian party allied with Hezbollah to two years in prison for leaking information to Israel, a judicial source said.

Karam, who collapsed when the sentence was read, was also stripped of all civil rights, the source said.

The verdict did not find Karam guilty of spying for Israel, however.

The prosecutor also sentenced Lebanese fugitive Elias Karam, who had allegedly introduced Fayez Karam to Israeli officers in Paris, to 10 years in prison in absentia.

Fayez Karam, a member of the FPM, was arrested last summer, the first political figure to be detained in Lebanon as part of probe launched in 2009 into Israeli spy networks.

The 62-year-old had headed the Lebanese army’s anti-terrorism and counter-espionage unit during the 1980s and was close to FPM leader Michel Aoun, who was army chief toward the end of the 1975-1990 civil war.

Aoun, who was staunchly anti-Syrian during the civil war, entered into a controversial alliance with the Iran and Syria-backed Hezbollah in 2006, a year after returning to Lebanon from exile in France.