Libya’s rebel leadership said Tuesday that ­forces loyal to Moammar Gaddafi will face a crushing military assault if they fail to meet a Saturday deadline to surrender the pockets of the country that they still control. 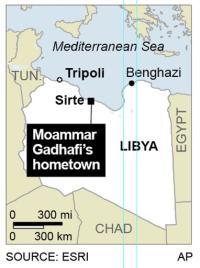 The opposition controls Tripoli, the capital, and much of the rest of the country, but the center of Libya remains firmly in the hands of Gaddafi loyalists, effectively dividing it between east and west.

As rebels try to cement their hold and restore basic services such as water and fuel, Sirte, the longtime leader’s home town, is seen as the most important pro-Gaddafi holdout. Forces loyal to Gaddafi have reportedly retreated from towns taken by rebel fighters and have sought refuge in Sirte, 278 miles east of Tripoli, along the Mediterranean coast, and in Sabha, to the south of the capital.

“If we want to unify the whole country and if we want to declare that the war is over, we have to free Sirte,” Mustafa Sagazly, deputy interior minister of the opposition’s Transitional National Council, said in an interview Monday. “Otherwise, we’ll be in a continuous state of war.”

Opposition officials and tribal leaders who control Sirte and the surrounding areas have been negotiating for days, but there have been few signs of progress. A well-armed military brigade that is loyal to Gaddafi and hunkered down inside Sirte has rejected all talks with rebel leaders, Sagazly said, forcing tribal chiefs to negotiate in secret.

Mustafa Abdel Jalil, the head of the Transitional National Council, said Tuesday that opposition leaders could no longer wait for the remaining pockets of Gaddafi supporters to compromise.

If the Sirte negotiations fail, rebel forces said, they will attack the town Saturday, when celebrations marking the conclusion of the holy month of Ramadan come to an end. The rebel military would then move south and southwest to other towns still in the hands of Gaddafi loyalists, including Bani Walid and Sabha, which are essential to restoring the supply of water and oil, commanders said.

“We can act decisively to end this in a military manner,” Abdel Jalil said. “We do not wish to do so, but we cannot wait any longer.”

NATO has carried out bombing campaigns around Sirte over the past few days, and military leaders in the de facto rebel capital of Benghazi said opposition fighters are closing in on Sirte from the east and the west. They have faced fierce resistance from the town in the past and, over the past week, have been fired at with Grad rockets and some Scud missiles. Gaddafi forces are stationed in camps inside and outside the town, rebel commanders said.

Gaddafi’s wife and three of his children — including daughter Aisha, who, according to Algeria’s Health Ministry, gave birth to a girl Tuesday — fled to the neighboring country the day before, underscoring the quick erosion of Gaddafi’s control over Libya. The rebels’ interior minister, Ahmed al-Darrad, on Tuesday called Algeria’s decision to grant asylum to Gaddafi’s family an “enemy act,” the Associated Press reported.

Rebel leaders said they believe Gaddafi’s son Khamis, commander of an elite military unit, and his intelligence chief, Abdullah al-Senussi, have been killed. But the mystery surrounding Gaddafi’s whereabouts gives no comfort to Libyans who have long feared his rule.

Military commanders in Benghazi and council officials in Tripoli expressed confidence that Gaddafi will be captured soon and that the fighting will end.

“Gaddafi is now fleeing, and we have a good idea where he is,” council member Ali Tarhouni told reporters in Tripoli. “We have no doubt we will catch him.”

Analysts say the council must quickly assert its authority in Tripoli, showing people that it can control and stabilize Libya, even if pockets of resistance remain inside the capital and the center of the country.

“They have to start behaving as if they are the government of the whole country,” not just Benghazi, said Lisa Anderson, an expert on Libya and president of the American University of Cairo.

Just nine of the council’s more than 40 members, as well as six executive staff members, have relocated to Tripoli. Abdel Jalil said he will not move to the capital until it is “safe and stable.”

Reporters cannot independently confirm conditions in Sirte, and it is nearly impossible to reach residents by telephone. Benghazi residents with relatives in the town say their family members are too afraid to answer calls.

In the negotiations, the tribal leaders have sought assurances that no revenge killings will be carried out, Sagazly said, and they have refused to give up their weapons, out of fear.

“We are asking them to surrender their weapons to us, but this is something they don’t want to do,” he said. “So we might ask for just medium and heavy weaponry and allow them to keep personal-protection weapons.”

Council members also said that tribal leaders loyal to Gaddafi have asked to play a role in the future government and have asked for amnesty, demands the opposition said it cannot meet.

Whether through negotiations or through more fighting, council members say, Sirte and other pockets of resistance must fall into the hands of the opposition for Libya to move forward. Rebel commanders said they have had a difficult time holding their fighters back as they try to negotiate a peaceful solution.

“Sirte is the de facto political capital of the Gaddafi regime,” said Shamsiddin Ben-Ali, a spokesman for the council. “These fighters are anxious to see it surrender peacefully or take it by force.”