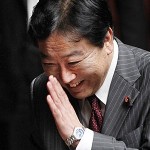 Japan’s parliament has elected a new prime minister. The fiscal conservative of the governing left-of-center party appears to have little support among the public.

There was never any doubt about the outcome after the majority Democrats selected Finance Minister Yoshihiko Noda as their new party president.

The announcement was made in Japan’s more powerful Lower House of Parliament that Noda won Tuesday’s balloting among representatives and will become the nation’s 95th prime minister.

He will take over at one of the most troubling times for Japan since its defeat in World War II in 1945.

Besides a stagnant economy, still the world’s third largest, the country is struggling to recover from the March 11 magnitude 9.0 earthquake and destructive tsunami, which has left 20,000 people dead or missing in the northeast.

The natural disaster also triggered the meltdown of reactors at a nuclear power plant in Fukushima prefecture.

The director of Asian studies at the Japan campus of Temple University, Professor Jeffrey Kingston, says at a time when the country needs a decisive figure, Noda does not come across as a strong or bold leader.

“He’s a compromise candidate,” noted Kingston. “He doesn’t have his own independent power base. And he’s not a particularly strong communicator. He’s not a populist at all. He’s sort of a typical throwback to the Japanese prime minister of yore, the faceless grey suits. Even in Japan his name recognition factor is quite low.”

Noda is acknowledging low expectations for himself, predicting he will not have high public support. During the brief campaign for his party’s leadership Noda said he was no goldfish, but rather an unattractive loach, a bottom-feeding fish.

Kan’s cabinet members submitted their resignation letters earlier Tuesday, but they are expected to remain in their posts until Noda names his own cabinet. The new prime minister’s inauguration is set for Friday in front of Emperor Akihito.

That ceremony has been held frequently in recent years at the Imperial Palace in Tokyo. None of Mr. Noda’s five predecessors has lasted longer than 15 months.