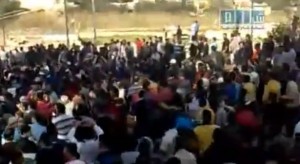 Security forces shot dead four demonstrators on Tuesday as people streamed out of mosques after prayers to mark the end of Ramadan and renewed protests against Syrian President Bashar al-Assad, activists and residents said.

The victims, who included a 13-year-old boy, were killed in the towns of al-Hara and Inkhil in southern Deraa province.

Demonstrations broke out elsewhere across the country, notably in Damascus suburbs, the city of Homs, 165 km (100 miles to the north) and the northwestern province of Idlib, the sources said.

“The people want the downfall of the president,” protesters shouted in the Damascus suburb of Harasta, where activists said dozens of soldiers defected at the weekend after refusing to shoot at the crowds.

In adjacent Saqba suburb a crowd held their shoes up in the air — an insulting gesture in the Arab world — and chanted anti-Assad slogans.

According to one activist group, troops have killed at least 551 civilians during Ramadan, the holiest period in the Islamic calender.

Five months into the street uprising against his rule, Assad, from Syria’s minority Alawite sect, is facing more frequent demonstrations. Protesters have been encouraged by the collapse of Muammar Gaddafi in Libya, with whom Assad had close ties, and rising international pressure on the ruling hierarchy.

The Obama administration froze the U.S. assets of Foreign Minister Walid al-Moualem and two other Syrian officials on Tuesday in response to Assad’s increasingly bloody crackdown.

“We are bringing additional pressure to bear today directly on three senior Assad regime officials who are principle defenders of the regime’s activities,” said David Cohen, Treasury’s Under Secretary for Terrorism and Financial Intelligence, in a statement.

Moualem and Shaaban have appeared in the media defending military assaults on towns and cities, saying Syrian forces were pursuing “terrorists”. They are not part of Assad’s decision making inner circle, composed of his younger brother Maher, other family members and top security officials already on the U.S. sanctions list.

Opposition figures in Syria see international pressure as crucial stripping Assad of legitimacy and in helping raise the momentum of peaceful protests, with residents and activists reporting increasing defections among Syrian troops, drawn mostly from the Sunni majority population but dominated by Alawite officers effectively under the command of Maher.

In a report published on Tuesday, the Syrian Revolution Coordinating Union grassroots activists’ group said Assad’s forces killed 551 people during Ramadan and that 130 others were killed on July 31, the eve of Ramadan, in a tank assault on the city of Hama, scene of a 1982 massacre by the military.

“The report does not include the number of martyrs who were not identified by name nor… bodies that were abducted (by security forces) and not returned to their families,” it said.

Chibli Mallat, a professor of law at Harvard, and chairman of the Right to Nonviolence international group of public figures, said Syria’s death toll, although high, was still relatively less than Libya, where the revolution turned into armed conflict and needed NATO’s help.

“It may be also the case in Syria today…But is it necessary to reach the point that arms are engaged?” Mallat said in an article published on Tuesday in Egypt’s al-Ahram online.

“Is it not wiser, albeit perhaps more frustrating, to keep the revolution pure in the tenacity of its nonviolence, rather than lose the absolute moral superiority against violent rulers?” said Mallat, who is Lebanese.

The official state news agency said state television had aired an audio recording of two “terrorists” who described themselves as activists.

It said the tape revealed “a full agenda of provocation and targeting police and army camps and terrorising peaceful citizens in the name of freedom and non-violence”.

The Syrian National Human Rights Organisation, headed by exiled dissident Ammar al-Qurabi, said pro-Assad forces, including a loyalist militia known as shabbiha, had killed at least 3,100 civilians since the uprising erupted in March, including 18 people on Monday alone.

The U.N. High Commissioner for Human Rights, Navi Pillay said this month that 2,200 people have been killed, with Assad’s forces continuing “to employ excessive force, including heavy artillery, to quell peaceful demonstrations and regain control over the residents of various cities.”

Syrian authorities blame “armed terrorist groups” for the bloodshed and say they have killed 500 soldiers and police.

In the town of Rastan near the city of Homs on Monday, and armoured force of Assad loyalists surrounded a town and fired heavy machineguns after dozens of soldiers defected, activists and residents said.

One woman, 45-year-old Amal Qoraman, was killed and five other people were wounded, they said. Dozens of people were arrested in house-to-house raids in the town of 40,000.

Syrian authorities have repeatedly denied that army defections have been taking place.

Foreign media was expelled after the uprising began in March, making verification of reports difficult.

European Union governments may impose sanctions on Syrian banks as well as energy and telecommunications companies within a week, along with a planned embargo on oil imports from the country, EU diplomats said on Monday.