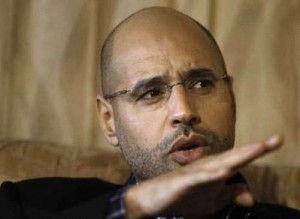 Moamar Gaddafi’s son Saif al-Islam has led a defiant regime fightback in Tripoli, as rebels claimed NATO jets had joined the fight for the Libyan capital.

Journalists from the BBC and the AFP news agency reported seeing Saif, Gaddafi’s heir apparent and a key regime figure, in Gaddafi’s Bab al-Azizya compound in the west of the city, despite earlier claims that he had been captured by rebels.

Al Jazeera broadcast footage which it said was a fist-pumping Saif surrounded by jubilant regime supporters on the streets of the capital, and Reuters reported that he had turned up at the media’s Rixos hotel near Bab al-Azizya.

Saif reportedly told the BBC that his father was still in the city and claimed his troops had “broken the back” of the rebels after luring them into a “trap”.

“I am here to refute the lies,” he reportedly told AFP, referring to reports of his arrest.

“Tripoli is under our control. Everyone should rest assured. All is well in Tripoli,” he claimed.

But the secretary of the National Front for the Salvation of Libya, Ibrahim Sahad, disputes those claims.

“The majority of the capital is now in control of the forces of freedom fighters. They are getting some resistance in some areas where just pockets of resistance is still there,” he said.

Fierce resistance from regime troops has forced rebels to give up some of the ground they captured during the weekend’s lightning advance into Gaddafi’s capital.

Rebels are believed to control about 80 per cent of the city, and reinforcements were heading into Tripoli from rebel-controlled areas to the south, east and west.

This morning rebels told the Al Arabiya satellite channel that NATO jets had carried out airstrikes on targets in the Gaddafi compound.

As fighting raged in the city, there was more confusion about the fate of Gaddafi’s other sons.

This morning the US ambassador to the Libyan rebel regime said that another of Gaddafi’s sons, Mohammed, had escaped after being reportedly captured.

But Al Jazeera reported that another son, military commander Khamis, may have been found along with that of powerful intelligence chief Abdullah al-Senussi.

There was no concrete word on the whereabouts of Gaddafi himself.

Bab al-Aziziyah, a huge complex where some believe Gaddafi, 69, might be hiding, was the focal point of fighting in Tripoli.

“I don’t imagine the Bab al-Aziziyah compound will fall easily and I imagine there will be a fierce fight,” Abdel Hafiz Ghoga, spokesman for the rebel National Transitional Council (NTC), said in an interview aired by Al Jazeera.

And rebels this morning said they had sent more fighters and weaponry from their coastal enclave of Misrata, about 200 kilometres to the east.

“Several ships arrived in our beloved capital Tripoli from Misrata, with a large number of fighters and ammunition on board,” said a statement from the Information Centre of the Military Council of Misrata.

But despite the news of reinforcements, this morning Middle East correspondent Ben Knight told AM that the rebels’ victory was far from certain.

Rebels swept into Tripoli two days ago in tandem with an uprising within the city.

Hundreds seem to have been killed or wounded since Saturday.

This morning fighting continued as rebels tried to flush out snipers and pockets of resistance.

Electricity in the entire capital with the apparent exception of Gaddafi’s compound was cut off, an AFP correspondent said.

The darkness did not prevent residents in the south-western Gorji neighbourhood spilling onto the streets, marching and singing as word spread that rebel reinforcements had arrived from Misrata and other eastern rebel areas.

In a sign Gaddafi allies were still determined to fight, NATO said this morning that government forces fired three Scud-type missiles from the area of Sirte towards the rebel-held city of Misrata.

World leaders have urged Gaddafi to step down, with US president Barack Obama saying his rule is coming to an end.

In an audio broadcast on Sunday before state TV went off the air, Gaddafi said he would stay in Tripoli “until the end”.

There has been speculation, however, he might seek refuge in his home region around Sirte, or abroad.