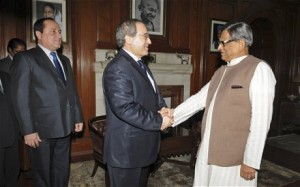 Syria has called on India as chair of the United Nations Security Council not to give into “Western propaganda” about its crackdown on protests, as Italy recalled its ambassador.

Faisal Mekdad, Syria’s deputy foreign minister, on a three-day visit to India, said in television interviews that he had asked India to use its influence on the Security Council to thwart the West.

“I am here to brief the Indian leadership against the prefabricated misinformation and on the unrealistic propaganda machinery against Syria,” Mekdad said in an interview with India’s NewsX TV station.

“Some circles in the West and in the United States want to aggravate the situation in Syria by supporting terrorist groups against the will of the overwhelming majority of the Syrian people,” he said.

He added in a separate interview with the CNN-IBN station: “What we expect India to do is not to allow Western countries to use the UN as a forum to support terrorism, to support extremism and to support the killings of innocent people.”

India, which has expressed “concern” over the violence and called for restraint, assumed the month-long presidency of the UN’s top body on Monday.

On the same day, the UN Security Council held a first session of emergency talks on the deadly crackdown, with Western powers again demanding a condemnation of the violence. A closed session ended with no agreement.

The emergency meeting in New York heard that 3,000 people had gone missing and 12,000 had been taken prisoner since the protests began in March.

India in a statement late Monday expressed its “concern” over the violence.

“The external affairs minister expressed concern on the recent escalation of violence (and) he urged the government of Syria to exercise restraint, abjure violence and expedite the implementation of political reforms taking into account the aspirations of the people of Syria,” it added.

Mr Mekdad said the Syrian government had invited all stakeholders to a “National Dialogue” to help end the protests.

“All forces willing to participate in the National Dialogue are welcome, but Syria will never discuss or negotiate with terrorists and extremist groups,” he said after meeting Indian Foreign Minister S.M. Krishna for official talks on Monday.

The Foreign Ministry said in a statement Tuesday that Rome is urging all EU nations to recall their envoys to Syria.