by yalibnan
2939
Qatar lived up to its reputation as a maverick in Middle Eastern politics this week by suspending the operations of its embassy in Damascus.
Share: 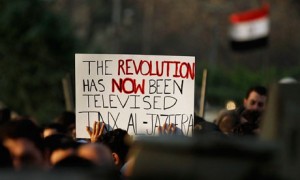 Qatar lived up to its reputation as a maverick in Middle Eastern politics this week by suspending the operations of its embassy in Damascus. The emir of the small but fabulously wealthy Gulf state has already gone far beyond the Arab consensus by supporting the Libyan rebels, sending cash and weapons to help them in their fight against Muammar Gaddafi. The United Arab Emirates is doing the same, but in a lower profile way.

Qatari investments in Syria have also reportedly been frozen, but the emirate was not reacting directly to Syrian repression. The measures were taken in response to attacks on its diplomatic mission in the leafy Damascus suburb of Ein Rummaneh, which was pelted with stones, eggs and tomatoes in protest at coverage of the unrest by al-Jazeera TV. The satellite channel is owned by Qatar, based in Doha and watched by millions of Arabs.

Qatar’s moves, in the words of analyst Karim Sader, were “more like a shrewdly calculated divorce from the Syrian regime than a fleeting spat”.

Other, more discreet action, is afoot. Arab media circles are rife with rumours of financial support from Qatar, the UAE and the Saudis for Syrian opposition groups— paying for conferences, communications and perhaps more.

Crucially though, there is no sign that Arab leaders are ready to publicly abandon Bashar al-Assad, five months into one of the bloodiest and most unpredictable episodes of the Arab uprising.

Nabil Elaraby, the new secretary general of the Arab League, certainly stuck to the non-interference script when he criticised Barack Obama for saying that Assad had “lost legitimacy”. That was an issue that could be decided only by Syrians, he insisted – a diplomatic disappointment for some critics – after visiting the Syrian president and sounding supportive about his belated, half-hearted attempts at reform.

It was easier for Elaraby’s predecessor, Amr Moussa, speaking just before stepping down and launching his bid for the Egyptian presidency. Moussa first criticised Nato’s bombing of Libya – despite having being instrumental in providing cover for UN-sanctioned action against Gaddafi – and then spoke of Arab “anger” about the violence in Syria, winning a rebuke from Damascus that he was “unbalanced and politically motivated”.

The turmoil in Syria has paralysed other Arab regimes. The country that describes itself as the “beating heart of Arabism” may not be popular, but it is a powerful regional player with strategic ties to Iran and important relationships with Hizbullah in Lebanon and Hamas in the Palestinian territories – and it craves a better relationship with the US.

Saudi Arabia, Syria’s bitter rival, especially in Lebanon, does not want to see chaos if Assad is forced from power or uses overwhelming violence and repression to hold on. Saudi officials have said nothing in public about the Syrian crisis and have no sympathy for the Arab spring. But they would doubtless like to see Assad cut down to size as a regional actor.

Post-revolution uncertainty in Egypt is a powerful reminder to the conservative Gulf states of the potential risks if “stable” dictators like Hosni Mubarak are abandoned by the US and forced from office. And their fear of fitna, which translates as sedition or sectarianism, look not entirely unjustified – as the ugly events in Homs have shown in recent days.

Syria’s neighbours Iraq and Jordan are watching anxiously, but keeping quiet. Their assumption is that the cohesion of the Damascus regime, opposition divisions and above all the near impossibility of Libyan-style foreign intervention all mean that Assad is not about to fall.

Israel is also monitoring the Syrian crisis but keeping uncharacteristically quiet. Its listening posts on the occupied Golan Heights, less than an hour from Damascus, must be picking up some unusual intelligence from Syria’s telephone and radio networks – and YouTube is a handy source for tracking defections by army officers refusing to kill their own people. As Binyamin Netanyahu acknowledged in an interview with the Saudi-owned al-Arabiya TV – which, like its rival al-Jazeera is covering the Syrian uprising closely – anything Israel says will be counterproductive.

But Syria’s crisis is mainly a problem for Arabs. This week the Arab Writers Union, meeting in Cairo, held heated discussions about the situation in Syria, Yemen and elsewhere in the region, but its final communique managed only to condemn the crushing of peaceful protests “in more than one country” – without daring to name which ones.

As Ahmed Asfahani, commentator for the pan-Arab daily al-Hayat, put it: “If even Arab writers can’t protest about what’s happening in Syria, what hope is there that their governments will do anything?”