‘Bodies on the streets’ in Syrian crackdown 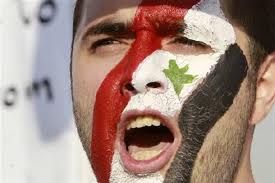 A resident told the Reuters news agency by phone that the army fired at worshippers in eastern Khalidiya district as they left the Khaled Ibn al-Walid mosque in the early hours of the morning on Thursday.

“There is heavy military deployment in Homs; military checkpoints are everywhere in the city. There is heavy shooting in Bab al-Sebaa, one house was burned and the humanitarian conditions are dire,” the Syrian Observatory for Human Rights, a London-based independent rights monitor, said in a statement.

Activists claim that more than 50 people have been killed in the city since the weekend.

Last Friday, more than one million people turned out across Syria, mainly in the cities of Hama and Deir Ezzor, to protest against Syrian President Bashar al-Assad’s rule and to demand the release of hundreds of detainees seized at earlier anti-government rallies.

“Many gunmen on the streets [are] shooting randomly,” Al Jazeera’s Rula Amin reported from the Lebanese capital Beirut, citing sources in Homs.

“People are telling us some of the injured and people who have been killed are still on the streets. People have not been able to pick them up because there’s so much [gunfire].”

A resident of the city said mosque loudspeakers were calling for people to the aid of Bab al-Sebaa.

The resident, who spoke on the condition of anonymity for fear of government reprisals, said the neighbourhood had been subjected to heavy machine-gun fire since 4am.

Activists said some of those being arrested had played leading roles in protests while others were Homs residents who had been randomly detained.

Some said family members of activists had been arrested in order to force their relatives to turn themselves in.

Our correspondent said that demonstrators and government officials had given very different accounts of what was happening.

“If you talk to the activists in the opposition, they say these are security people shooting at people who are potentially protesters, getting revenge for taking the streets,” she said.

“They accuse militias loyal to the government of carrying out all of the vandalism acts and the shooting.

“If you look at the government media and websites, they talk of sectarian violence inside the city and they speak of armed gangs that had been shooting, injuring and killing members of the security [forces].”

On Wednesday, troops commanded by Assad’s brother surrounded the Damascus suburb of Harasta, sealing of its dozen entrances as part of an ongoing crackdown on urban centres that have experienced protests on a daily basis.

“They are wearing combat fatigues, helmets, ammunition belts and carrying assault rifles. Water, electricity and phones have been cut,” a resident said.