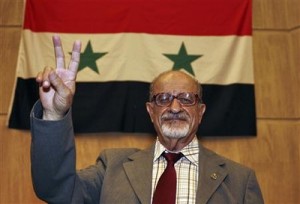 A meeting of Syrian opposition figures in Istanbul ended late on Saturday with the election of a 25-member National Salvation council composed of Islamists, liberals and independents.

“We shall work towards reaching out towards other opposition groups to lead the country towards the democratic vision we have,” Haitham al-Maler told Reuters at the conclusion of the often fractious one-day meeting.

The meeting took place a day after the biggest demonstrations so far in Syria by protesters seeking an end to 41 years of Assad family rule. On Friday, President Bashar al-Assad’s troops killed at least 32 civilians, including 23 in the capital Damascus.

During the Istanbul meeting, the opposition groups appeared divided over whether to form a government-in-waiting or wait to see how the uprising unfolds.

They finally compromised on forming the council which will meet on Sunday to appoint an 11-member committee. A further meeting will seek to tighten bonds between the opposition groups.

Of the close to 350 people who attended the opposition congress, many were Syrian exiles who had left the country years earlier.

The meeting had hoped to join members of the opposition inside Syria via a video link to a conference in Damascus, but that was called off after Syrian security forces targeted the venue as part of Friday’s crackdown in the capital.

During the meeting, tribal leaders complained they were not being given the recognition they deserved, while some Kurdish factions withdrew from the meeting, and liberals fretted over the size of the Islamist block.

Photo: Leading Syrian opposition figure Haitham al-Maleh, a former judge who was among political prisoners released by Assad in March when the uprising began, flashes a V sign as he poses in front of a Syrian flag during a meeting in Istanbul July 16, 2011. REUTERS/Emrah Dalkaya