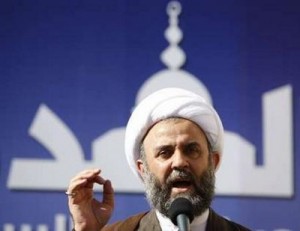 Qaouq said on Sunday that “luring international pressure on the Lebanese cabinet is more than a national sin.”

“It is unfortunate to see that at a time when the cabinet is seeking to confront the Israeli danger, the March 14 forces are luring international pressure to weaken, blackmail and topple the government,” he said and added

“We have blocked the road to American hegemony and we won’t allow it to return.”

He slammed the international community for not being concerned with Lebanon’s sovereignty, wondering why it isn’t defending Lebanon’s right to reclaim the Shebaa farms, Kfarshouba hills and the village of Ghajar from Israel.

The Iranian and Syrian backed brought down PM Saad Hariri’s government on January 12 over the Special Tribunal for Lebanon’s ( STL) indictment which was widely expected to implicate Hezbollah members in the assassination of former PM Rafik Hariri in 2005.