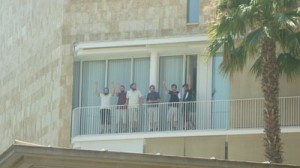 According to Lebanese media reports the Estonian government paid the kidnappers of the seven Estonian tourists 10 million euros to win their release.

Al-Mustaqbal reported that the release of the seven Estonians was the result of painstaking negotiations conducted by Estonia and France with non-Lebanese sides, including Syrian authorities.

Estonian Foreign Minister Urmas Paet was evasive yesterday when asked whether the Estonian government paid a ransom or not to release his countrymen :

“There are always costs involved with such a joint (release) operation,” Paet told a news conference in Tallinn, Estonia.

He did not elaborate except to say that “the cost was not minor ” , While, according to Estonian media reports Estonian Prime Minister Andrus Ansip was much more “categorical, indicating that no negotiations have been carried out with terrorists and nobody has given them money. You will not hear anything else from me, Ansip declared to journalists.”