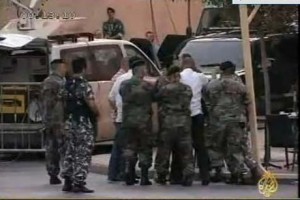 The reporter Ali Hashem of the Arabic satellite TV network al-Jazeera was beaten by parliamentary police and thrown out of Nejmeh Square, al-Jazeera said Wednesday.

Media Against Violence organization called on the judiciary to charge those responsible for this assault.

The organization also called on the parliament’s police to abide by the law that says that its jurisdiction “falls only within the Parliament’s premises and not outside it.”

One media observer told Ya Libnan…” this may be the sign of the times. Al Jazeera reporters were subjected to attacks in Syria , Egypt , Libya and Tunisia and now that Lebanon is becoming the new dictatorship the free media will suffer the same consequences.”