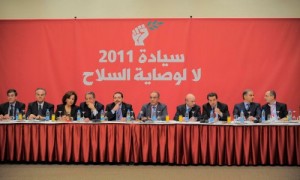 March 14 MP Mohammad Hajjar said on Wednesday that the primary mission of the newly-formed government is to confront the Special Tribunal for Lebanon, a UN-backed court investigating the 2005 murder of former Prime Minister Rafik Hariri, calling on the cabinet to quit adding that he will not grant it his vote of confidence.

“We call on this government to resign , and we will not grant it our vote of confidence,” Hajjar said Wednesday morning during the second day of parliamentary session aimed to debate the ministerial policy statement of newly-formed government of Prime Minister Najib Mikati’s cabinet.

Hajjar said March 8 coalition’s “coup undermined the people’s voted and resorted to the use of weapons that are still controlling the country.”

“How can we trust a government that has a prime minister who pretends to be impartial at a time when impartiality no longer exists, and when impartiality has yielded to weapons and become a spearhead to evade justice?” he asked.

Similarly March 14 MP Jean Oghassabian told Miqati on Wednesday that he should quit his post but if he decides to stay “history will have no mercy on you.”

The international tribunal isn’t an enemy, he said in his address at parliament during the second day of discussions of Miqati’s policy statement.

“We believe in partnership and pluralism,” said the lawmaker.

“I reject that weapons be used in everyday politics,” Oghassabian told parliament, saying he also refuses a culture of fear in political life. He announced that he will not grant the cabinet his vote of confidence.

March 14 MP Jamal al-Jarrah told parliament that Lebanon is in need for “white hearts and not black shirts,” in reference to Hezbollah.

He accused Miqati’s cabinet of preparing for civil war through the current policy statement.

He said : “Former PM Rafik Hariri was really killed, not “in principle.”

“Lebanon was liberated from hegemony so don’t restore it. The STL was actually formed so don’t abandon it as you are actually paving the way for a new civil war,” he said.