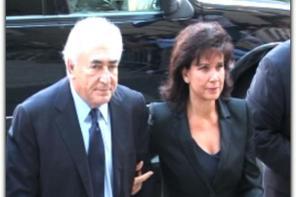 Political life in France was once again upended as former International Monetary Fund chief Dominique Strauss-Kahn was released from house arrest Friday in New York, a development that fascinated the French public but left both supporters and rivals unsure of the impact on the presidential race.

Before Strauss-Kahn was pulled off a Paris-bound plane in May and charged with sexually assaulting a housekeeper at a luxury hotel in Manhattan, he was seen not only as the leading challenger to French President Nicolas Sarkozy but also as a figure of national pride, calmly piloting the world economy through choppy waters.

His arrest led to soul-searching in his home country, where the political elite and journalists had long known of his dalliances with women but followed an unwritten rule of not prying into the sex lives of politicians.

Although Strauss-Kahn still faces the sexual assault charges in the United States, the case against him is in such serious doubt, because of questions about the credibility of his accuser, that he has been released on personal recognizance.

French television pushed aside regular programming to focus on the case, and French newspapers, which had already published Friday’s print editions when the news broke in New York late Thursday, layered article after article on their Web sites. The sites were slowed by the high Web traffic.

The culture of privacy here is so strong that President Francois Mitterrand was able to maintain a second family while in office without it becoming public until shortly before he stepped down in 1995.

But the charges against Strauss-Kahn have been impossible to ignore. Since the arrest, other women have come forward alleging that he pressured them for sex. Strauss-Kahn’s wife, Anne Sinclair, formerly a prominent broadcast journalist, has steadfastly defended her husband.

People here were riveted by images of an unshaven, handcuffed Strauss-Kahn being led on a “perp walk” by police — something that would never happen in France, where people taken into custody have far more control over their public appearances.

Many French commentators said that through such images, Strauss-Kahn was being judged long before any trial. Le Parisien, a Paris newspaper that has complained that the American press had been too quick to treat Strauss-Kahn as a criminal, said on its Web site that the “American and British press had made an about-face” Friday in how they referred to the accuser and the accused.

Jean-Marie Le Guen, a Socialist member of the National Assembly and a Strauss-Kahn ally, said that the American media had been “violent toward Strauss-Kahn and toward the French.”

Claude Perset, a physical therapist in Paris, joked Friday that “those American courts have gotten themselves in a pickle now, haven’t they?”

Strauss-Kahn’s closest allies trumpeted the developments, with a spokesman for his Socialist Party calling it an “immense relief.” His supporters renewed their complaints against a U.S. justice system that many see as brutal. A former Socialist prime minister, Lionel Jospin, said the news from New York was a “thunderclap.”

Sarkozy kept a low profile Friday as his strategists determined how they would react to Strauss-Kahn’s shifting fortunes. Strauss-Kahn had been beating Sarkozy in a hypothetical matchup in many polls, based on his appeal not just to the traditional leftist base of the Socialist Party but also to those who admired the free-market policies he had championed at the IMF and his handling of the bailouts of struggling European countries.

A top Socialist Party official, Francine Aubry, had made a pact with Strauss-Kahn before the charges that if he ran for president, she would not. She declared her candidacy earlier this week.

She said Friday that as a “friend,” she felt “immense joy” at the news and said she hoped he was soon “released from this nightmare.” Still, it appeared unlikely she would reconsider her candidacy, and many of Strauss-Kahn’s deputies have already committed themselves to her or to Francois Hollande, the other leading Socialist candidate.

Hollande said Friday that he would be open to changing a July 13 filing deadline to run in the Socialist presidential primaries, giving Strauss-Kahn a chance should he make it back to France in time.

There was no comment from the Elysee Palace on Friday. Prime Minister Francois Fillon, who was appointed to that position by Sarkozy, said at a news conference in Jakarta, Indonesia, that people should “calmly wait for the American judicial system to do its work.” WP

Photo: Dominique Strauss-Kahn and his wife, Anne Sinclair, depart a hearing at the New York State Supreme Courthouse. Strauss-Kahn was released without bail.