Saudi prince warns: We will build nukes if Iran gets them 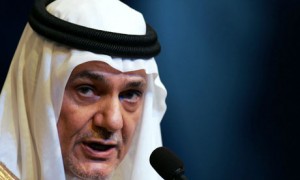 A senior Saudi Arabian diplomat and member of the ruling royal family has raised the spectre of nuclear conflict in the Middle East if Iran comes close to developing a nuclear weapon.

Prince Turki al-Faisal, a former Saudi intelligence chief and ambassador to Washington, warned senior Nato military officials that the existence of such a device “would compel Saudi Arabia … to pursue policies which could lead to untold and possibly dramatic consequences”.

He did not state explicitly what these policies would be, but a senior official in Riyadh who is close to the prince said yesterday his message was clear.

“We cannot live in a situation where Iran has nuclear weapons and we don’t. It’s as simple as that,” the official said. “If Iran develops a nuclear weapon, that will be unacceptable to us and we will have to follow suit.”

Officials in Riyadh said that Saudi Arabia would reluctantly push ahead with its own civilian nuclear programme. Peaceful use of nuclear power, Turki said, was the right of all nations.

Turki was speaking earlier this month at an unpublicised meeting at RAF Molesworth, the airbase in Cambridgeshire used by Nato as a centre for gathering and collating intelligence on the Middle East and the Mediterranean.

According to a transcript of his speech obtained by the Guardian, Turki told his audience that Iran was a “paper tiger with steel claws” that was “meddling and destabilising” across the region.

“Iran … is very sensitive about other countries meddling in its affairs. But it should treat others like it expects to be treated. The kingdom expects Iran to practise what it preaches,” Turki said.

Turki holds no official post in Saudi Arabia but is seen as an ambassador at large for the kingdom and a potential future foreign minister,

Diplomatic cables obtained by WikiLeaks and published by the Guardian last year revealed that King Abdullah, who has ruled Saudi Arabia since 2005, had privately warned Washington in 2008 that if Iran developed nuclear weapons “everyone in the region would do the same, including Saudi Arabia”.

Saudi Arabian diplomats and officials have launched a serious campaign in recent weeks to rally global and regional powers against Iran, fearful that their country’s larger but poorer regional rival is exploiting the Arab Spring to gain influence in the region and within the kingdom itself.

Turki also accused Iran of interfering in Iraq, Lebanon, Syria, and in the Gulf state of Bahrain, where Saudi troops were deployed this year as part of a Gulf Co-operation Council force following widespread protests from those calling for greater democratic rights.

Though there has previously been little public comment from Riyadh on developments in Syria, Turki told his audience at Molesworth that President Bashar al-Assad “will cling to power till the last Syrian is killed”.

Syria presents a dilemma for Saudi policymakers: although they would prefer not to see popular protest unseat another regime in the region, they view the Damascus regime, which is dominated by members of Syria’s Shia minority, as a proxy for Iran.

“The loss of life [in Syria] in the present internal struggle is deplorable. The government is woefully deficient in its handling of the situation,” Turki said at the Molesworth meeting, which took place on 8 June.

Though analysts say demonstrations in Bahrain were not sectarian in nature, two senior Saudi officials in Riyadh said this week that Tehran had mobilised the largely Shia protesters against the Sunni rulers of the Gulf state. Iran has a predominantly Shia population. Around 15% of Saudis are Shia. The officials described this minority, which suffers extensive discrimination despite recent attempts at reform, as “vulnerable to external influence”.

Though there has been negligible unrest internally, Saudi Arabia has been shaken by the events across the Arab world in recent months and has watched anxiously as a number of allies – such as President Hosni Mubarak – have been ousted or have found themselves in grave difficulties. President Ali Abdullah Saleh of Yemen is being treated in a Saudi Arabian hospital for wounds caused by a mysterious blast that forced him to leave his country this month.

The former Tunisian ruler Zine al-Abedine ben Ali, whose relations with Riyadh were complex, is reported to have been housed in a luxurious villa in the Red Sea port city of Jeddah after he fled his homeland for Saudi Arabia.

Saudi officials admitted that decision-makers in Saudi Arabia were “not keen” on demonstrators ousting governments, but said they were “even less keen on killing and massacres”.

Turki also warned that al-Qaida has been able to create “a sanctuary not unlike Pakistan’s tribal areas” in Yemen.

Saudi Arabian foreign policy historically has been pro-western, although differences have emerged with the United States in recent years. The Arab Spring has also caused some tension, with the deployment of troops in Bahrain opposed by Washington.

There has also been conflict following western charges that the kingdom has exported radical strands of Islam around the Muslim world.Turki said that “in all areas, Islam must play a central yet development role” and insisted that “closer monitoring” now ensured that funds raised in the kingdom “were not misused”.

Internally, Saudi Arabia faced problems because of the youthfulness of its population, radicalism and different sectarian identities, Turki said.

Senior officials at the ministry of interior in Riyadh said that Iran was using ideology to “penetrate” the Arabian peninsula “in the same way al-Qaida did”.

Turki also reiterated a long-standing Saudi call for a nuclear free zone in the Middle East, which would include both Iran and Israel and would be enforced by the United Nations security council.

The prince said sanctions against Iran were working. He welcomed the consensus in Washington that military strikes against Tehran would be counterproductive.

Analysts said that Turki’s words about developing nuclear arms may have been intended to focus western attention on Saudi concerns about their regional rival rather than to indicate any kind of definite decision by Riyadh because the practical and diplomatic obstacles of doing so would be immense.

Iran and the west remain in dispute over its nuclear programme. The US and its allies insist Tehran aims to develop atomic weapons, a charge that Iran rejects.