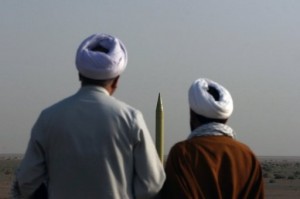 Hague’s comments came a day after Iran’s elite Revolutionary Guards said they had fired 14 missiles in an exercise, one of them a medium-range weapon capable of striking Israel or US targets in the Gulf.

In a statement to lawmakers, Hague said: “Iran has also been carrying out covert ballistic missile tests and rocket launches, including testing missiles capable of delivering a nuclear payload in contravention of UN resolution 1929.”

He said Iran had also announced plans to triple its capacity to produce 20 percent enriched uranium, adding: “These are enrichment levels far greater than is needed for peaceful nuclear energy.

“We will maintain and continue to increase pressure on Iran to negotiate an agreement on their nuclear programme,” including sanctions, he said.

There was no immediate reaction from Tehran, which denies Western claims that it is pursuing nuclear weapons under the guise of its civil atomic programme.

On the first day of the exercise on Monday, the Guards unveiled an “underground missile silo” which they said was designed for launching their medium-range missiles, state television reported.

The Guards’ aerospace commander Brigadier General Amir Ali Hajizadeh insisted Iran’s missile programme posed no threat to European nations but was intended to provide defence against “US targets in the region and the Zionist regime.”

Iran has said that its latest exercise is not aimed at any country but carries “a message of peace and friendship.”

On Tuesday US State Department spokeswoman Victoria Nuland said Iran was “bragging” about its assets, but did not specify whether Washington thought the tested missiles were nuclear-capable.

Iran’s missile programme, which is under the control of the powerful Guards along with its space projects, has been a mounting source of concern in the West.

Western governments fear Tehran is seeking to develop a ballistic capability to enable it to launch atomic warheads under cover of its civil nuclear programme.

Earlier this month the British envoy in Tehran was summoned to the foreign ministry over the claims.

“Iran continues to connive in the suppression of legitimate protest in Syria and to suppress protests at home,” Hague said.